Guterres to decide next steps in Cyprus problem negotiations 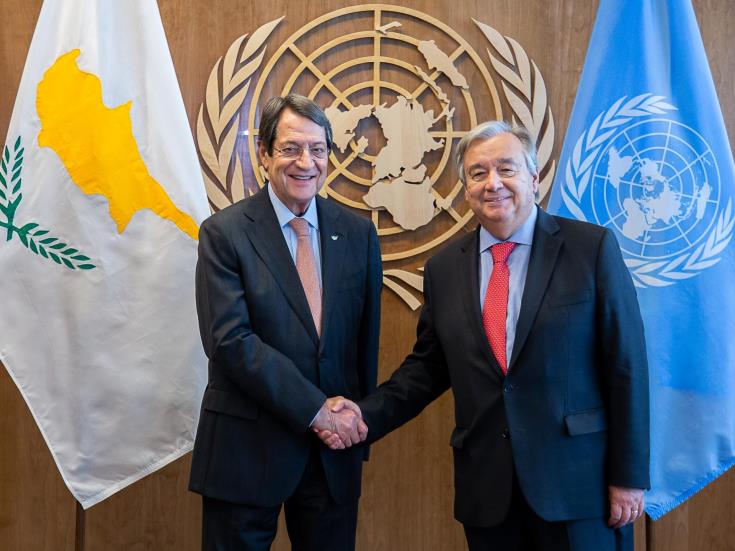 The United Nations remain at the disposal of the parties regarding the Cyprus problem, President Anastasiades after a meeting with UN Secretary General, Antonio Guterres, in New York.

Guterres will decide on the next steps, in agreement with the two sides, as soon as he receives the report of his envoy, Jane Holl Lute, and concludes a series of contacts with the interested parties.

The meeting with Guterres lasted over 20 minutes and was attended by Foreign Minister Nikos Christodoulides, Government Spokesman Prodromos Prodromou, negotiator Andreas Mavroyiannis, Permanent Representative to the UN Kornelios Korneliou, and diplomatic adviser Pantelis Pantelides. On behalf of the UN, among those present were Lute and UN Undersecretary General for Political Affairs Rosemary DiCarlo.

In statements after the meeting, President Anastasiades said he conveyed the positions of the Greek Cypriot side, which believes talks should resume the soonest possible with an aim to achieve a functional and viable solution, without foreign guarantees or occupation troops.

He added that the basis for a new effort should be UN resolutions, the acquis communautaire, and progress achieved so far, and that the Turkish and Turkish Cypriot side should submit their positions on the Guterres framework in writing, as the Greek Cypriot side has already done.

President Anastasiades said a new effort should be well-prepared, in order to avoid a devastating deadlock.

He also pointed out that the presence of the UN Peacekeeping Force in Cyprus (UNFICYP) was necessary in order to maintain security and stability.

“The reaction of the Secretary General was that the United Nations remain at the disposal of the parties,” President Anastasiades said, adding that Guterres noted that the aim is the reunification of Cyprus to the benefit of both its communities.

Asked if Guterres believed there was ground for a new effort, President Anastasiades said the UN Secretary General was “very careful, reiterating that he must first receive Lute’s report,” and conclude his own meetings.

To questions if a new effort would involve the five Permanent Members of the UN Security Council, President Anastasiades said they would be present in the event of a meeting but this did not mean they could not contribute to efforts beforehand.

Asked about the opening of additional crossing points in Cyprus, President Anastasiades said “we are ready, and that which remains is to determine that the other side is ready.”

He explained that in the case of the Dherynia crossing point, the agreement was for the Turkish military post to be moved back but the Turkish side denies that this was agreed and refuses to move the post. “So, there is a clear violation of that which has been agreed,” the President noted.

Asked if during his contacts in New York there was an interest for investments, President Anastasiades said that the aim was to strengthen cooperation with various bilateral agreements, such as avoiding double taxation, which contributed to encouraging investments.