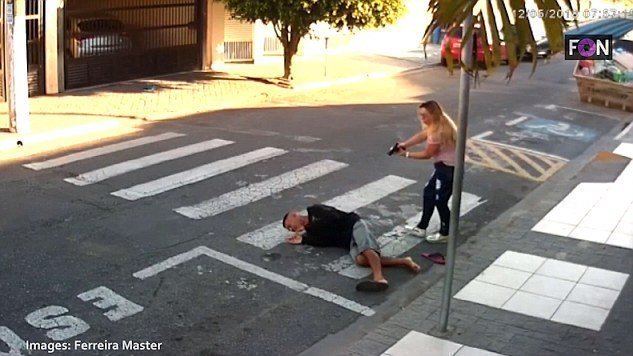 Dramatic security footage shows a suspect named as Elivelton Neves Moreira, 21, lunging towards the crowd with a gun outside a private school in Sao Paulo. But his attempted crime backfired when military police officer Katia da Silva Sastre, 42, pulled out her own weapon and unleashed three shots.

The video shows Moreira, who later died in hospital, falling backwards and clutching his chest before Sastre shoves him on to his front with her foot having thrown her handbag aside on Saturday morning. Officer Sastre is being hailed a hero for her act of bravery and was honored in a ceremony by Sao Paulo Governor Márcio França on Sunday.

Although the suspect died later the same day in the hospital from his injuries, Officer Sastre is still being commended for her actions despite the ‘regrettable’ outcome. Writing on Twitter Governor França said: ‘I went earlier to the 4th BAEP in the east of Sao Paulo to honor a very special mother: Corporal Katia Sastre. Her courage and precision saved mothers and children, yesterday at the door of a school.’

As a thank you for her off-duty valor, the governor then presented her with a purple orchid plant at her police station, fittingly on Brazil’s Mother’s Day.