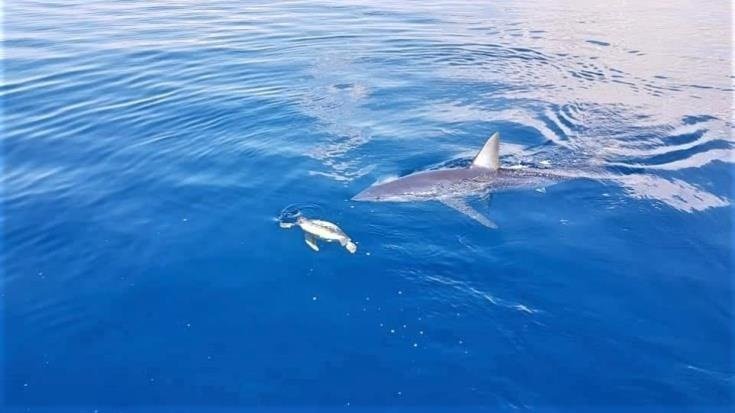 A shark filmed attacking a sea turtle more than a nautical mile off Limassol is an endangered species protected under international conventions and should be protected, the Greens said on Sunday as they queried what the Fisheries Department was doing to track down those who had reportedly killed it.

The video of the shark was posted on social media and featured on the news yesterday.

It prompted the Department of Fisheries and Marine Research to post a statement and photos on its Facebook  page informing that the shark appears to belong to the species Isurus oxyrinchus — the shortfin mako shark that is found in the ocean and sometimes in coastal waters. Its usual length is about 270 cm. It feeds on swordfish, tuna, other sharks and squid. Occasionally this species feeds on marine mammals and sea turtles, it said.

The shortfin mako shark is a endangered species according to the IUCN Red List. In the Mediterranean it is protected under international conventions and laws, therefore its fishing is prohibited, the department added.

In its statement on Sunday, the Greens noted that according to the news reports the shark in question had been killed.

“It would be appropriate for the Department of Fisheries and Marine Research to inform us if it has started an investigation to find the perpetrators and to implement the law,” the party said.

It also queried whether the department carries out public information campaigns so that people drop their hostility towards specific types of animals which because they are hunters by nature (and because of Hollywood) have been branded more or less as murderers.

“The sharks that dominate human societies (mainly in the financial system) consume far more people daily than the sharks swimming in the sea,” the party concluded.

By In Cyprus
Previous articleMalta to reopen its airport on July 1
Next articlePeople more important than the economy, pope says about Covid crisis