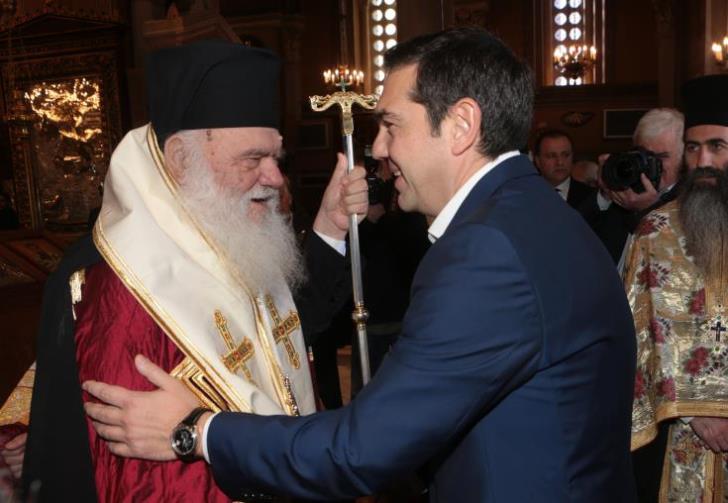 A landmark agreement has been reached in Athens that will end the status of priests and bishops as civil servants and bring Greece a step closer to separation of Church and state.

Some 10,000 Church employees will come off the payroll, although their wages will still be paid as a state subsidy.

The Orthodox Church plays a significant role in public life in Greece.

What have they agreed?

The two leaders say the state will continue to pay the clergy’s salaries but no longer as civil servants. Greece has been trying to scale back its public sector after years of international bailouts.

Payment will be made through an annual subsidy of around €200m, and that fund will not be affected if the Church increases or reduces the number of priests.

In return, the Church will not oppose moves to make the state “religion neutral” and would drop any claim to property once taken over by the state.

The two sides said they would set up a joint fund to manage and develop sites claimed by both Church and state. Revenues and bills would be split 50-50.

Will anything change in Greece?

The deal between the prime minister and archbishop is definitely an important step towards Greece becoming a genuinely secular country, but the Greek Orthodox Church will remain omnipresent in numerous aspects of the Greek state.

Pupils at Greek schools still start their day with a prayer and continue to be taught religion throughout their 12-year mandatory education.

Greek courts have a religious icon hanging above the judge’s seat and some public services still have forms which require to know the citizens’ religion, despite this being theoretically illegal.

Even at the top political level, every new Greek government, including the last two headed by left-wing Syriza leader Alexis Tsipras, have invited the country’s top clergy to sanctify them during the cabinet’s swearing-in ceremony.

And despite the archbishop’s concessions on constitutional reform, the preamble to the Greek constitution will continue to read “In the name of the Holy and Con-substantial and Indivisible Trinity” – a reference to the fact Greece is not simply Christian, but Christian Orthodox.

This deal is a first step, but there is clearly a very long way ahead before Church and state in Greece are completely separate.

What is the reaction to the agreement?

It will have to be approved by Church leaders as well as the government and MPs.

Not everyone is happy. A former education minister in the prime minister’s party complained that the salaries of 10,000 priests were being guaranteed when the number of hospital doctors during the bailout years was even smaller.

The association of Greek clerics complained that losing the status of civil servants could deny them existing rights and said priests felt betrayed that they had not been consulted about the deal.

By In Cyprus
Previous articleMan caught speeding at 195 km/h, drunk
Next articleCyprus among countries with most preterm births