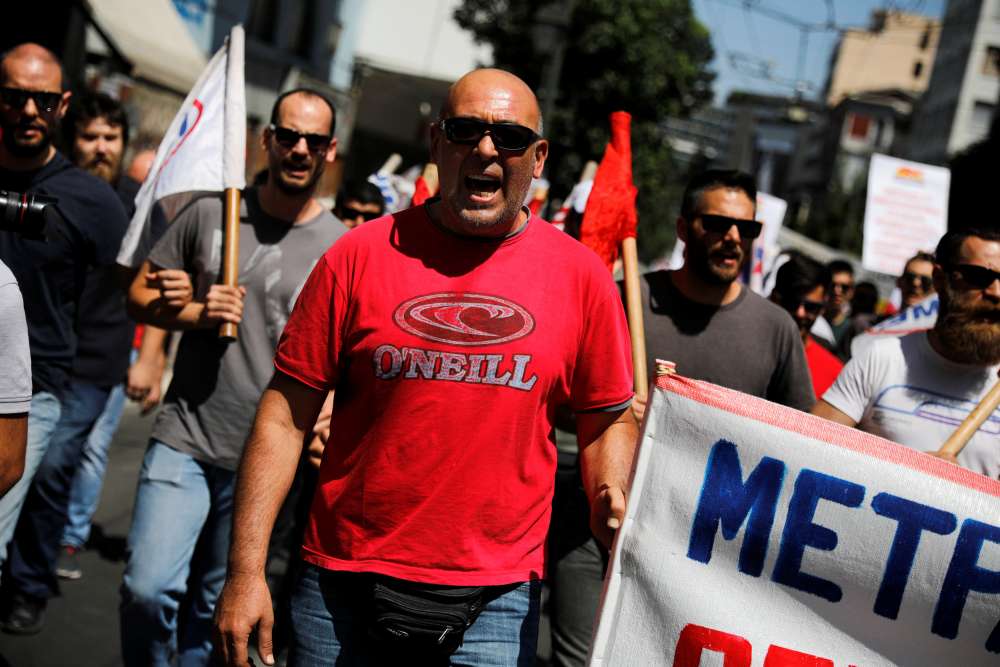 Thousands of Greek workers went on strike on Wednesday to protest against years of belt-tightening and a new wave austerity measures that will kick in after the country’s third international bailout expires this summer.

Some flights were grounded, ships were unable to sail and public transport was disrupted in the one-day nationwide action organised by Greece’s largest labour unions, the private sector GSEE and its public sector counterpart ADEDY.

More than 10,000 striking workers, youths and pensioners marched to parliament around noon, most of them waving flags of the Communist-affiliated group PAME. They held banners reading “No!” and “They have crushed our lives!”

“They (politicians) have devoured us,” shouted Yannis Vlachos, a municipal worker from the southern Peloponnesian city of Sparta, pointing his finger at parliament.

Since its debt crisis began eight years ago, Greece has received 260 billion euros in bailout loans in exchange for implementing austerity measures such as public sector layoffs, tax hikes and pension cuts.

“The government, which implements the same policies that have destroyed the people and the economy, is loading the back of workers and pensioners with new unbearable measures,” GSEE said in a statement.

Despite public opposition, Prime Minister Alexis Tsipras in 2015 signed up to Greece’s current international bailout, which is due to expire in August.

Tsipras’ leftist-led government last year caved into lenders’ demands for more pension cuts and tax hikes in 2019 and 2020, but has promised to reinstate collective bargaining and increase the minimum wage in the post-bailout period. But workers warned of more protests.

“It will be a new bailout which will be named something else,” Grigoris Vafiadis, a culture ministry worker, said. “These blows against the poor … must end now.

By In Cyprus
Previous articleRoad warning: Heavy rain in Prodromos
Next articleFuel prices rise in Cyprus