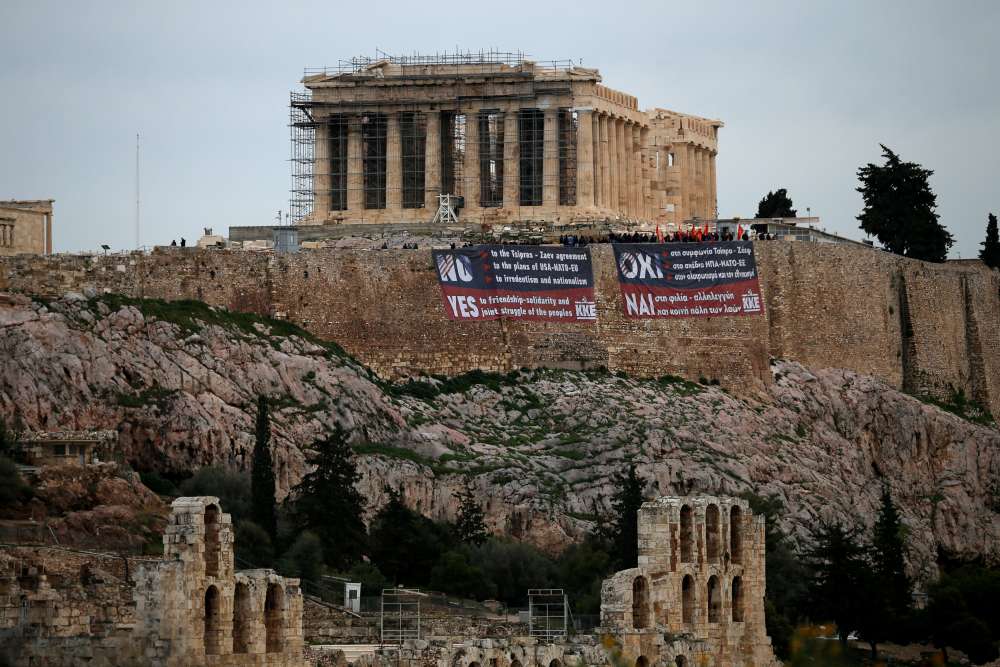 Members of the Greek Communist Party (KKE) unfurled banners on Thursday on the walls of the ancient Acropolis in Athens, Greece’s most iconic landmark, in a protest against a name deal with the Former Yugoslav Republic of Macedonia.

The Balkan neighbours agreed last year to change the ex-Yugoslav republic’s name to North Macedonia, seeking to end a dispute of nearly 30 years. The agreement, which Greek lawmakers are expected to ratify on Thursday, has stirred angry protests in both countries.

“No to the Tsipras-Zaev agreement; No to the plans of USA-NATO-EU; No to irredentism and nationalism,” read the 20-metre banner in English next to the Parthenon temple, referring to the prime ministers of both countries.

Alongside it, a banner carried the same message in Greek.

Greeks have rallied against the deal several times since it was agreed last June, and tens of thousands of people demonstrated outside parliament on Sunday. More protests are planned in Athens on Thursday.

Late on Wednesday, unidentified attackers hurled petrol bombs at the home of lawmaker Theodora Tzakri, of the governing Syriza party, in northern Greece. Earlier, about two dozen protesters rallied outside the office of Syriza lawmaker Yiannis Syfakis, also in the north.

Polls have shown most Greeks oppose the term “Macedonia” being used in any agreement, fearing territorial claims over the northern Greek region of the same name. Many also consider Macedonia, the kingdom ruled by Alexander the Great, to be an integral part of their history.

FYROM took its name in 1991 following the break up of Yugoslavia. Until the agreement, Greece had demanded it be referred to internationally as the Former Yugoslav Republic of Macedonia (FYROM), its formal name at the United Nations.