Greek Prime Minister in Cyprus for an official visit 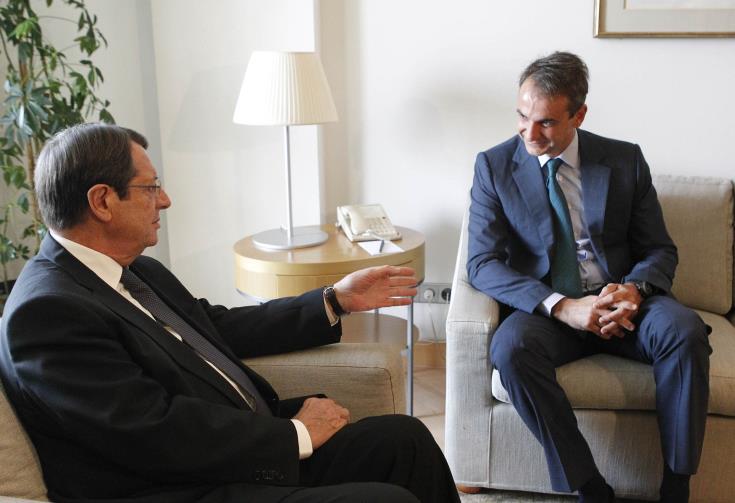 Greek Prime Minister Kyriakos Mitsotakis begins today a two-day official visit to Cyprus, his first after he assumed his duties following the elections of July 7.  He is accompanied by Greece’s Foreign Minister Nikos Dendias and other officials.

Mitsotakis arrives on the island on Monday morning and right after his arrival will hold a meeting with President Nicos Anastasiades followed by statements to the press, scheduled for 1200 noon.

The Greek Premier will then meet with House President Demetris Syllouris and in the afternoon he will hold separate meetings with the leaders of the political parties and representatives of organisations and bicommunal NGOs.

On Tuesday, the Prime Minister will meet Archbishop Chrysostomos. He will then visit Fylakismena Mnimata, the tombs of the heroes who lost their lives during the anti-colonial struggle against the British Rule as well as Makedonitissa Tomb, the military cemetery were Greek Cypriot and Greek officers and soldiers are buried. They were killed during the 1974 Turkish invasion.

Mitsotakis is also set to visit the ELDYK army camp.

Greek Foreign Minister, Nikos Dendias, has said that the official visit of Greek Prime Minister Kyriakos Mitsotakis to Cyprus on Monday will send a clear message to Turkey that the violation of the sovereign rights of the Republic of Cyprus is not acceptable.

Government Spokesman Prodromos Prodromou said that the new Greek Prime Minister’s first official visit in Cyprus on Monday is particularly important as it takes place at crucial time for both countries.

A visit by Greece’s Prime Minister to Cyprus is always important, he said.

The visit, he added, “is particularly important, it is Mitsotakis’ first visit and it coincides with crucial period, with all these provocations both Cyprus and Greece are faced with.”

According to the Government Spokesman apart from the symbolism behind the first official visit the Greek premier makes, it will also be an opportunity for consultations to take place, noting that the two countries are in constant contact.

The Prime Minister of Greece will be accompanied by Ministers of Foreign Affairs, Energy and the Government Spokesman while the Greek Defence Minister was in Cyprus recently, he said.  Therefore, he added, “there is communication on all important matters in order to see in what way to put an end to Turkey`s provocative stance and through negotiations to seek a settlement of the Cyprus problem.”