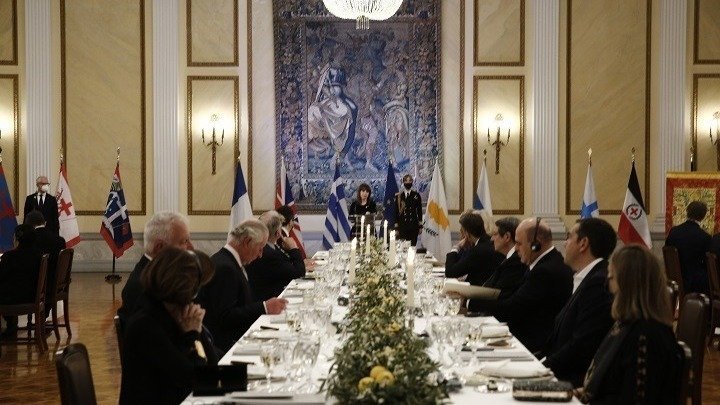 President of the Hellenic Republic Katerina Sakellaropoulou welcomed foreign leaders to the Presidential Mansion for a state dinner celebrating the 200th anniversary of the Greek Revolution (1821), on Wednesday evening.

Addressing representatives of Cyprus, Britain, Russia, and France, the Greek president spoke of long ties between Greece and their countries from the very birth of the modern Greek state.

As she also noted, the contribution of these great powers of that era was crucial, while the philhellenic movement provided continuous tangible and intangible support. At the same time, the Greeks’ revolt against the Ottoman Empire deeply influenced public opinion in Europe and the United States. “A philhellenic consciousness was formed that saw in the liberation of our country a major geopolitical and statehood event,” she said.

All social classes in Greece united before a common purpose, with self-renunciation and self-sacrifice, while along with Greeks were Cypriots as well who either fought and died with the Greeks or funded their revolution, Sakellaropoulou said. Greeks were influenced by the American and French revolutions to fight not simply for their liberty but for a state that was democratic and liberal, she added.

Within a short time after the declaration of war, the president said, Greeks managed to establish a series of constitutions, democratic authority and representation, with the evolving constitutions reflecting “a strong imprint of the Enlightenment.” But, she pointed out, the heritage of 1821 is not simply Greek – it bears the universality of ideas and values of its era.

Today, the Greek president noted, Greece returns to that birthright in the midst of challenges like the pandemic, climate change and dialog between civilizations. Although tensions in the public sphere run high, politics serve social needs and the public interest. “Our democracy cannot shrink under current events,” she noted, as basic values and principles enshrined in constitutional documents also serve to build relations between nations. It is to these common values that “we have the great joy of honoring together, today,” Sakellaropoulou concluded.

Sakellaropoulou’s speech was followed by brief addresses of the visiting officials.

Anastasiades: A small number of Greeks united to defeat the Ottoman Empire

Cyprus President Nicos Anastasiades expressed his appreciation and joy over celebrating the bicentennial of the Greek Revolution (1821) together with Greek people, during his brief address at the state dinner on Wednesday.

“Through this heroic revolution, the notion of freedom managed to eliminate any differences, and to unite a small number of Greeks who were at the end victorious against the large Ottoman Empire,” he underlined.

Anastasiades, who is accompanied by his wife Andri, will attend the military parade at 10:00 on Greek Independence Day (March 25) at Syntagma Square.

A part of the essence of Greece is within us all, said Prince Charles of Wales during his address at the state dinner .

Addressing Greek and foreign state leaders and dignitaries, the heir apparent to the British throne added that Greece’s spirit permeates societies and democracies, being the source of western civilization. Without Greece, he pointed out, modern laws, the arts, and culture at large would not have prospered.

Referring to his special bonds with Greece and its people, Prince Charles said it is the home country of his grandfather Prince Andrew of Greece & Denmark and the birth place of his father Prince Phillip. Charles’ grandmother Princess Alice of Battenberg helped rescue a family of Jews during the Nazi occupation of Athens, the prince recalled, which earned her a Righteous Among the Nations recognition by Israel.

Greece’s 1821 triumph is not credited to a single heroic figure, he underlined, but to the extraordinary courage and vigor of all its people. The British, he noted, did not perceive the liberation struggle of a foreign peoples, but as the pursuit of a common struggle, as noted through Byron’s and Percy Bysshe Shelley’s poetry.

Prince Charles also expressed his great admiration for what he called the strength of Greek people, and said he was particularly moved by the resilience of young people in Greece, both during the economic crisis and the pandemic. He said he was pleased to be have been able to help them through the Prince’s Trust International to find jobs or start their own businesses.

The 1821 Greek struggle, he said, could serve as a source of inspiration, as societies and economies are currently tied in a process of reconstruction, and Greece can count on its British friends now as much as it did back in 1821.

Greece and Russia have stood by each other for long, Russian PM says

Greece and Russia helped each others at critical times, Russian Federation Prime Minister Mikhail Mishustin said during a state dinner on Wednesday, noting his country’s contribution to the Greek people’s struggle for independence.

“Russian Navy officers were part of the international peace mission to Crete. Russian soldiers and officers fought at the Macedonian Front during World War I. In World War II, they fought next to Greek rebels against the invading Nazis,” he noted.

Mishustin also referred to a long history of ties between the two countries, and to common history, cultural and spiritual values, and the mutual regard between them. The two peoples will have an opportunity to learn more of each other through the current Greek-Russian Year, he added.

The friendship and mutual understanding between the two countries provide a stable foundation for collaboration in several sectors, he said, from transportation and energy to agricultural businesses and high technology, and he also mentioned the great affection Russians have for Greek resorts.

He said that the coronavirus pandemic has brought changes to the joint agenda of the two countries, which should promote collaboration and projects that benefit their peoples. They must also build constructive dialog between Russia and the European Union, based on equality and mutual respect of interests. “We have every opportunity to take action,” he said.

Florence Parly: Greece and France, a 200-year relationship of love

Parly arrived in Greece on Wednesday evening to attend events for the bicentennial of the Greek Revolution (1821), including a military parade on Thursday.

Speaking at the Presidential Mansion, Parly quoted the late former French President Francois Mitterrand, and she said that “all our reference point are here, in this land, in this light and in these colors”.

People in France and across the world feel great enthusiasm when they think of Greece’s great struggle for freedom, she noted, and for standing up to oppression and spoke of “a great love uniting the two peoples for 200 years.”
Being a Philhellene means being a friend of freedom, of justice and of solidarity, she concluded.