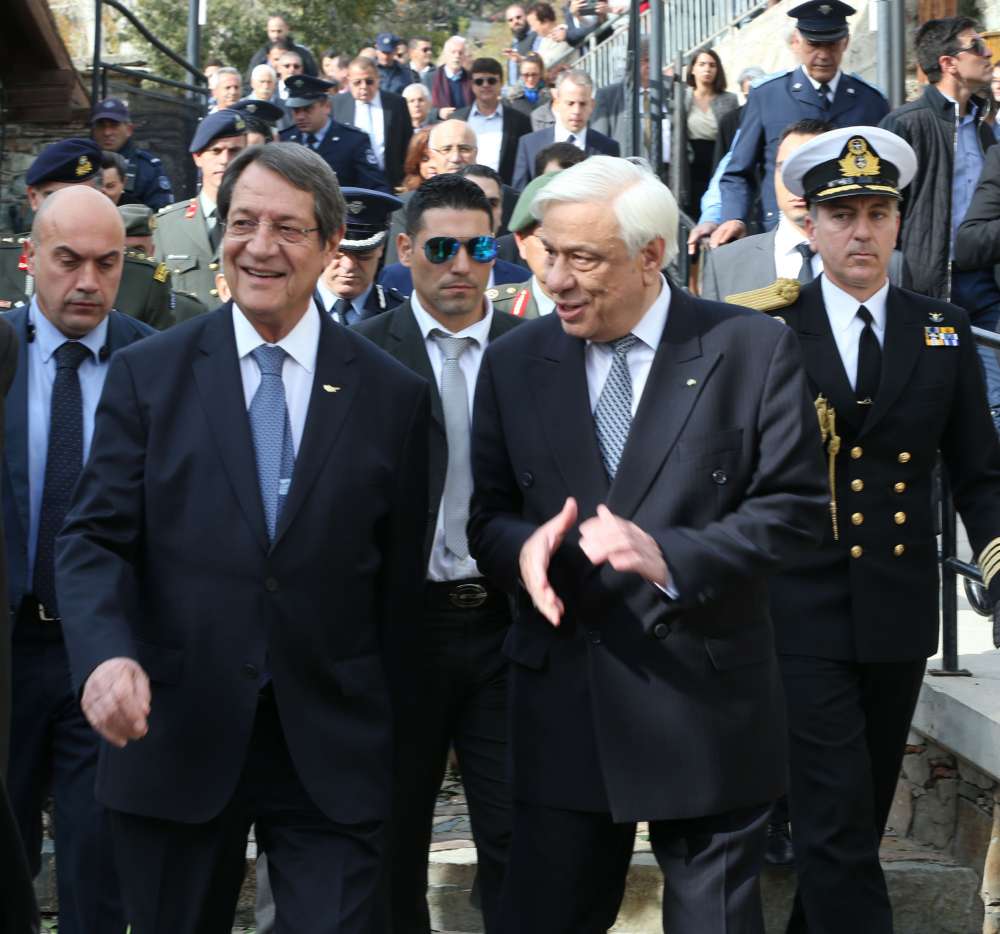 Greece’s President Prokopis Pavlopoulos said on Sunday that there cannot be a solution of the Cyprus problem diverging from the principles of the international law and the European acquis.

Pavlopoulos said this is the national policy supported by everyone, including President Anastasiades.

“These are the principles and values that we honour and through them we defend the European Union” he said, speaking at the national memorial service of Kyriakos Matsis, a member of the Greek-Cypriot liberation movement EOKA that fought against the British rule in Cyprus between 1955 and 1959. Matsis was killed by the British in 1958, in Dikomo.

President of Cyprus Nicos Anastasiades also attended the service, held in Palaichori, Matsis’ birth place. “We are in absolute agreement and we have a common policy with the Greek Government as regards the solution of the Cyprus problem, and it shall be followed until the end” he noted.

Following the memorial service, Pavlopoulos and Anastasiades unveiled a bust of Kyriakos Matsis, in the surroundings of his ancestral home.

In his speech, Pavlopoulos said that Cyprus and Greece have shown in practice their sincere willingness for a just and viable solution of the Cyprus problem, as soon as possible and stressed the need for a solution that will fully respect the international and the European law.

He noted that the international law is part of the European acquis and therefore the principles of the Charter of the United Nations are too.

This conclusion, he explained, combined with the fact that the sovereignty of the member states of the European Union is regulated directly by the provisions of the EU Treaty, leads directly to the conclusion that the solution of the Cyprus problem should ensure at least the three following characteristics of the Republic of Cyprus:

Firstly, federal characteristics, since any form of confederation is inconceivable in terms of the institutional standards with which each member state of the European Union must comply in order to effectively ensure the implementation of the European acquis.

Secondly, a single international legal personality, and consequently a single citizenship for the citizens of the Republic of Cyprus.

Thirdly, the ability of the institutions of the Republic of Cyprus to fully exercise its internal and external sovereignty. Pavlopoulos said that this necessary characteristic precludes any third country guarantees and the presence of military troops on Cypriot soil.

By In Cyprus
Previous articleMay: Getting rid of me risks delaying Brexit
Next articleLooted mosaic from Turkish occupied church returns home