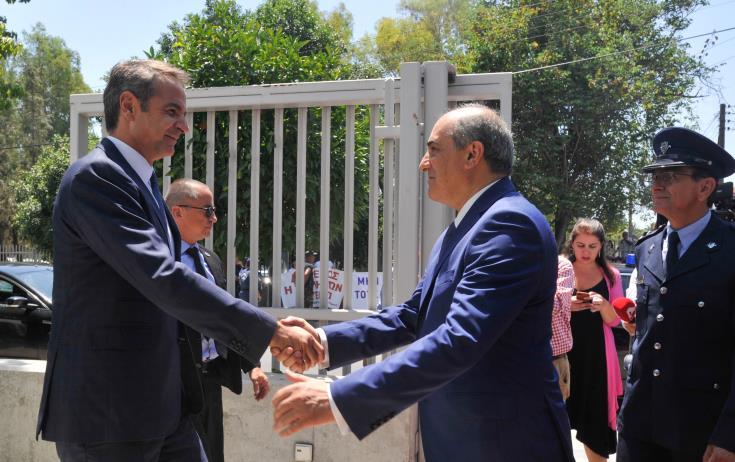 Greek Prime Minister Kyriakos Mitsotakis saidon Monday that Athens and Nicosia will address the challenges they face in the eastern Mediterranean in the framework of the EU, the bilateral cooperation as well as the trilateral cooperation they have with other countries in the area.

Mitsotakis met with the House President Demetris  Syllouris right after the consultations he had with President Anastasiades at the Presidential Palace. He is visiting Cyprus  on a two day official visit.

Syllouris spoke of the new start Mitsotakis is making in the political scene following the elections of July 7th in Greece, and referred to the brotherly ties the two countries share. Syllouris said that the Greek Premier has huge problems to address and many of them are similar to what Cyprus is faced with in the international arena and in the EU. He said that the potentials are big and the good cooperation in all sectors and within all the institutions, will bring success.

The Greek Prime Minister said that this new beginning is made after a strong mandate he received at the elections. He added that the economic crisis is over and Greece is now in a new path to the future. Mitsotakis said that what is at stake for both Greece and Cyprus is to try to search for solutions that are more consensual.

He also  referred to the economic crisis Cyprus was faced with and the fact that Cyprus recovered quite quickly and showed political maturity. The Premier also recalled that Cyprus has a different political system and the executive power and legislative powers are distinguished.

They also discussed issues related to education, research and technology as well as investments.