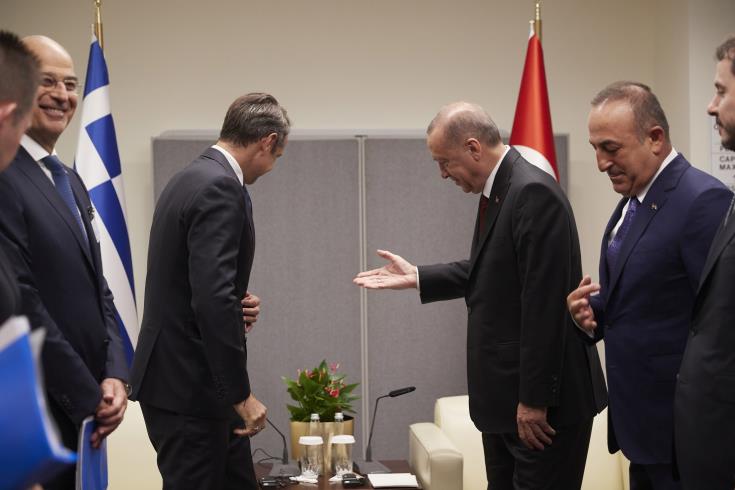 The Cyprus issue, the refugee and migrant crisis, as well as Greek-Turkish economic and trade relations were among the issues discussed on Wednesday during a meeting between Greek Prime Minister Kyriakos Mitsotakis and Turkish President Recep Tayyip Erdogan, in New York.

Greek government sources said that during the meeting, held on the margins of the UN General Assembly, Mitsotakis expressed support towards the positions of the Republic of Cyprus in relation to efforts for a Cyprus settlement, as well as with regards to securing an equitable share for Cyprus’ communities from the exploitation of offshore hydrocarbon resources.

Mitsotakis and Erdogan agreed that the two governments should cooperate closely in order to improve the climate for the benefit of their people and for the region’s stability, the same sources said.

They also agreed to activate the Greek-Turkish High-Level Cooperation Council and tasked the Foreign Minister of Greece, Nikos Dendias, and his Turkish counterpart, Mevlut Cavusoglu, to proceed with the necessary preparations.

Among others, they agreed to make every effort in order to minimize migrant flows in the Turkish coast and in the sea, while the Greek Premier asked for the reopening of the Halki Theological Seminary. The same sources said that Ankara is rather positive on the last issue.

The meeting between Mitsotakis and Erdogan in the UN headquarters lasted for about 45 minutes. Diplomatic sources said that Dendias and Cavusoglu had a discussion earlier on Wednesday, on the sidelines of a multilateral meeting.