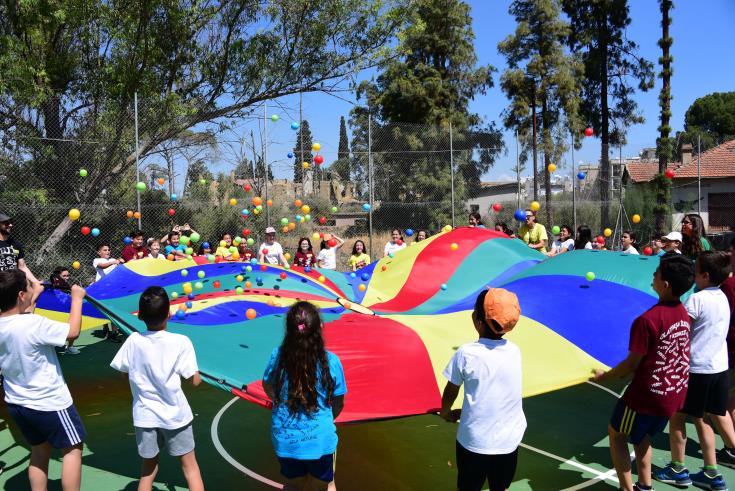 Greek Cypriot and Turkish Cypriot educators and activists shared their efforts to build peace in Cyprus in the context of an open day plenary meeting of the 43rd International Institute for Peace Education which is taking place in the Nicosia buffer zone this week.

In 2018, a total of 328 Greek Cypriot and Turkish Cypriot pupils together with 47 accompanying teachers were given the opportunity to visit Strasbourg in the context of the Euroscola programme, head of the European Parliament’s office in Cyprus Andreas Kettis told the conference, in his address.

Kettis said that Euroscola is a pioneering programme implemented by the European Parliament. It is addressed to high school pupils between 16 and 18 years of age, who travel to Strasbourg and in essence perform the duties of MEPs from all 28 EU member states. Teachers, he added, also have the opportunity to mingle and exchange best practices.

He also informed the conference of “together. eu”, a platform introduced by the European Parliament at the end of May. We want to listen to you, to hear your views about how the EU should function in the future, he told participants who hail from EU countries.

Association for Historical Dialogue and Research (AHDR) Co- President and board member of the Home of Cooperation Kyriakos Pachoulides outlined the idea behind the association’s establishment and the Home of Cooperation.  The association, he said, envisioned a society in which dialogue on issues of history, historiography, history teaching and history learning is welcomed as an integral part of democracy and is considered as a means for the advancement of historical understanding and critical thinking.

He showed photos from the 1960s where it is evident that the road outside the Home of Cooperation, located in the buffer zone in Nicosia, used to be a scene of armed conflict. Referring to the symbolic reason behind the decision to operate the Home of Cooperation in the buffer zone he noted that “we wanted to show to the people in Cyprus that peace is an option.” Questioning the conflict and the results of the conflict is an option, he said, adding that “we can build a better future for our children.”  Our decision, he noted, was to change the “dead zone” as it is known in the Greek Cypriot community and to transform it to a zone for cooperation.

Huseyin Akansoy and Christos Efthymiou spoke of the work done by their bicommunal initiative “Together We Can”. It is a team of relatives of missing persons who in Akansoy’s words “carry a message of change by bringing people together.”

“The pain of relatives of missing persons is the same and has nothing to do with ethnicity,” he noted, adding that the alternative to hatred is “finding our truth.” Together, as Turkish and Greek Cypriots, he said, it is important to be aware of each-others pain.

On his part, Christos Efthymiou said the initiative is a common platform of dialogue and action to raise public awareness regarding the events surrounding the violence which took place in the past and work towards minimising the exploitation of the common suffering to promote nationalism.

“Coming to terms with the violence of our past is very significant,” he said. In the context of the initiative relatives of victims from both sides working together develop a sense of common pain.  When relatives of victims talk to open bicommunal meetings the results are remarkable, he added.

Zuhal Mustafaogullari and Stavros Stavrou spoke about their experience as teachers when taking part in the project “Imagine”, a confidence building measure implemented by AHDR which brings school students together from both communities.

Mustafaogullari said she teaches history in Turkish occupied Famagusta. She said that the project was a dream which would become reality with difficulty. When it was announced, she remembers that everyone wanted to take part and they had to have a draw. In the end, it was an outstanding day, she said, adding that on the way back in the bus the students were singing songs of peace. She spoke of the need for the programme to continue and to even have exchange programmes between schools.

Stavrou who teaches in a lyceum in Paphos said that many of Greek Cypriot students had never met Turkish Cypriots. We spoke with all students and found 25 participants and that before the day they travelled to Nicosia and the Home of Cooperation they had workshops to prepare the students. He said that he would not have believed it if he had been told before that in less than 3 hours the students would become friends.

Sener Elcil from KTOS union of Turkish Cypriot teachers and Apostolos Skouroupatis on behalf of POED union of Greek Cypriot elementary school teachers spoke of the cooperation between the unions and the work done to promote a culture of peace.

Elcil said that we need to internalise the peace culture. Peace means dialogue, tolerance, communication, equality, gender equality, he noted, adding that it has a holistic meaning and is embedded in our daily lives. According to Elcil education is the most influential instrument to promote peace among people. He went on outlining all the bicommunal action the union takes in cooperation with other Turkish Cypriot and Greek Cypriot teachers’ unions.

On his part, Skouroupatis said that much has been achieved in recent years with teachers organising activities which have to do with things Greek Cypriots and Turkish Cypriots have in common. The programme Imagine, he said, was a very successful effort, because through it, students had an experience of been in touch in a setting of mutual respect and mutual understanding. He also said that unions make an effort to be in close contact and to issue joint declarations and organise joint marches, adding that there still room for improvement.

The meeting which brings together 75 participants from 35 countries is organised by the Association for Historical Dialogue and Research and the International Institute on Peace Education, is under the aegis of European Parliament President, it is supported by the office of the European Parliament in Cyprus and it is funded by the German Ministry of Foreign Affairs.