Greek and Cypriot scientists discover compound which could treat leukemia 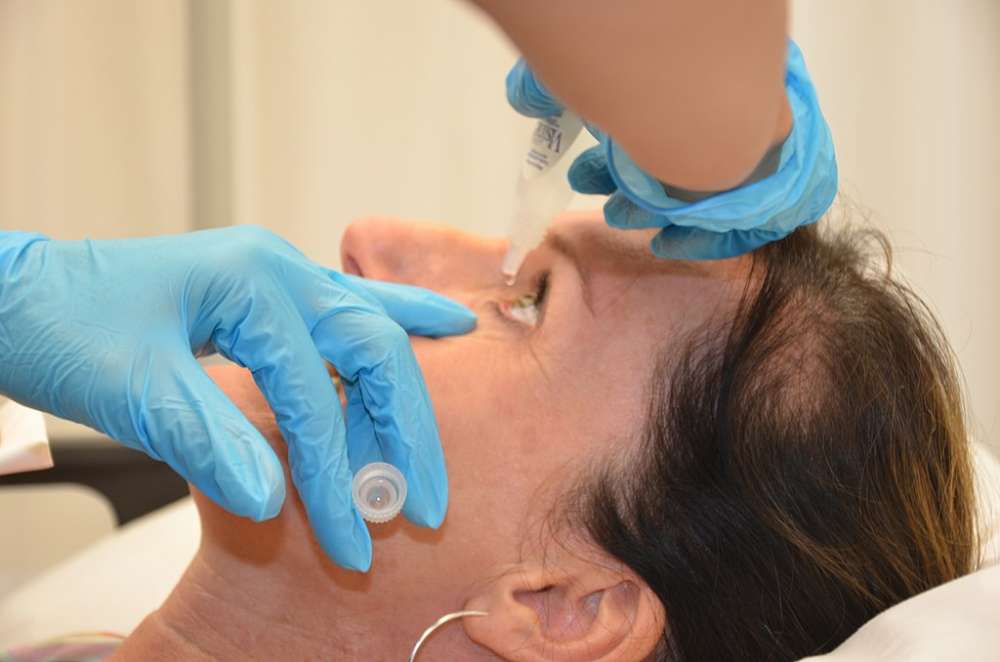 Greek and Cypriot scientists in the UK have found a potential new treatment for aggressive types of leukemia in a rather unexpected place, eye drops.

The new study, published today in Nature Communications shows how a drug targeted at a protein called SPRK1 has successfully treated human leukemias in mice.

Although some types of leukemia have a high survival rate, such as childhood acute lymphoblastic leukemia, acute myeloid leukemia (AML) is still very hard to successfully treat, particularly if the leukemia is caused by certain genetic alterations. One of these groups of genetic alterations are called MLL-rearrangements where the MLL gene gets wrongly fused to a variety of other genes during cell replication, leading to leukemia. These MLL-rearranged AMLs are amongst the most difficult to treat and have a very poor prognosis.

Previous work by the scientists using a well-known technique called a CRISPR screen, which in this case used CRISPR-Cas9 gene editing technology to disrupt thousands of genes in cancer cells to see which ones are vital for cell growth, had identified 400 genes which were potential drug targets in different types of AML.

SRPK1 was found to be particularly important in MLL-rearranged AML and is important in a process called angiogenesis, which is the production of new blood vessels. Targeting SRPK1 has previously been touted as a potential treatment for solid tumors including prostate cancer where the idea is to limit the blood supply to the tumor, inhibiting its growth. FDA-approved Avastin is already approved for inhibiting angiogenesis in a number of solid tumors, but targets a different gene.

The cancer research scientists found out that SRPK1 was also involved in some retinal diseases and that a company called Exonate was developing a drug called SPHINX31 to target it for a disease where the blood vessels in the eye bleed spontaneously, causing vision loss.

Importantly, the drug stopped the growth of several MLL-rearranged AML cell lines in lab experiments, but had no effect on normal blood cells. The scientists next transplanted samples from AML patients into mice with compromised immune systems, meaning the leukemia cells start to replicate inside the bone marrow of the mice, giving them leukemia. When the mice were given the new, experimental drug which targets SRPK1, it strongly inhibited the growth of the human AML without any noticeable side-effects on the mice.

“We have discovered that inhibiting a key gene with a compound being developed for an eye condition can stop the growth of an aggressive form of acute myeloid leukemia without harming healthy cells. This shows promise as a potential approach for treating this aggressive leukemia in humans,” Dr George Vassiliou, joint leader of the research from the Wellcome Sanger Institute and the Wellcome-MRC Cambridge Stem Cell Institute, told Forbes.

It may seem surprising to find a new potential treatment for leukemia in a drug being developed for eye disease, but as scientists are learning more and more about the genetic causes of diseases, there are increasing incidences of overlaps.

“When Dr Vassiliou told me that SRPK1 was required for the survival of a form of AML, I immediately wanted to work with him to find out if our inhibitors could actually stop the leukemia cells growing,” said David Bates, co-founder of Exonate and Professor at the University of Nottingham.

Although this early work in mice is promising, especially the seemingly low toxicity of the drug, it has yet to be tested on people with leukemia, where it is likely to be needed at much higher doses than in the eye drops for retinal disease.

“The fact that the compound worked so effectively bodes well for its potential development as a new therapy for leukemia. It will take some time, but there is real promise for a new treatment on the horizon for patients with this aggressive cancer,” said Bates.

By In Cyprus
Previous articleDances and songs from Spain, Hungary and Greece
Next articlePolice to carry out exercise in Larnaca and at airport