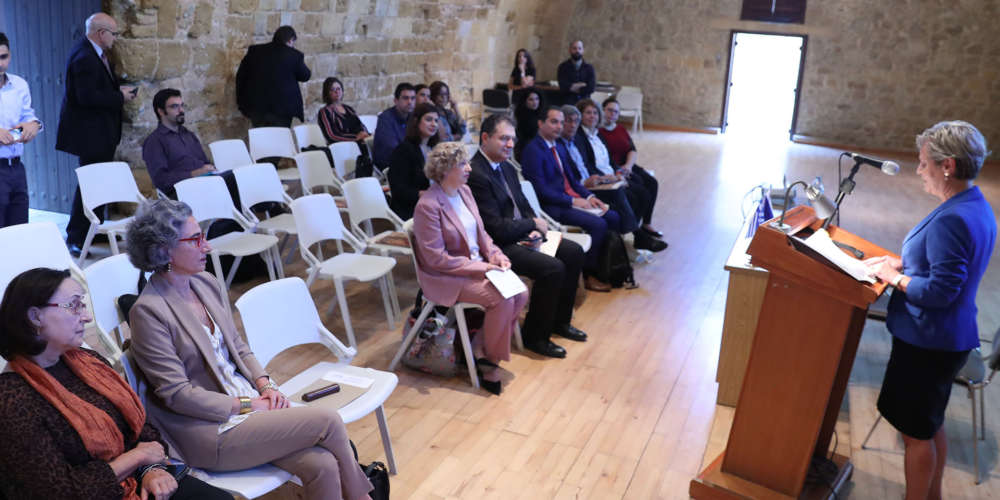 The launch of the Third Technical Meeting of the European partners of the “Digital Arcade of Greek-Cypriot Culture: Preservation and Promotion of Mediaeval Cultural Heritage in the Aegean and Cypriot Island (DigiArc)” was hailed by the Minister of Transport, Communications and Works, Vassiliki Anastasiadou.

The Department of Antiquities, the Cyprus University of Technology (Digital Heritage Lab/ UNESCO Headquarters), the University of the Aegean and the Ephorate of Antiquities of the Dodecanese are participating. The common goal is to highlight the mediaeval fortifications and castles of Rhodes and Cyprus by using contemporary technological actions.

“The best promotion and development of our archaeological wealth is a top priority for the Ministry of Transport, Communications and Works, which supports all the efforts of the Department of Antiquities in this direction,” said Anastasiadou.

“It’s absolutely imperative that, as we all focus on archaeology, we work closely to contribute to the development and sustainable future of the heritage, in a landscape that is constantly changing economically, socially and politically, at an unprecedented pace,” she added.

“We must also find ways to share the knowledge and the material at our disposal, with the ultimate aim being that of social and cultural benefit.”

The Department of Antiquities of Cyprus, after the accession of Cyprus to the European Union, has participated and is still participating in various European programmes. With a total of 14 programs in total, six of these programmes are integrated into the INTERREG Greece-Cyprus cross-border cooperation programmes.