Greece, Cyprus are ‘pillars of stability in region’ Pavlopoulos and Christodoulides say 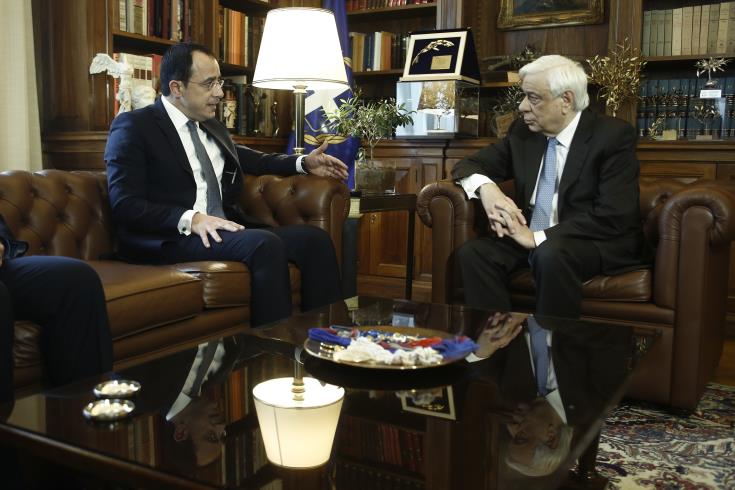 Foreign Minister Nicos Christodoulides was received Monday by the President of the Hellenic Republic Prokopis Pavlopoulos, at the Presidential Mansion.

Speaking to the Press, both Pavlopoulos and Christodoulides referred to Greece’s and Cyprus’ role as pillars of stability in the region of the Eastern Mediterranean.

Pavolopoulos stressed that Greece and Cyprus have created a united front to defend their sovereign rights. He also sent a message to Turkey that the Greek and the Cypriot government want a solution to the Cyprus problem the soonest, while noting that a solution must be fully aligned with the status of a European member state. He further expressed the view that any solution must be based on a federation, as “a confederation is not acceptable according to the European law”. He also stressed that a Cyprus solution must respect the European law, excluding the presence of occupying troops and third-party guarantees.

Moreover, he said that if necessary, Greece and Cyprus will defend their soil, their borders and their Exclusive Economic Zones, which are also European ones.

On his part, Cyprus’ Foreign Minister said that 2020 is a year of national, European and regional challenges, to which Europe is called to respond adequately, in order to preserve its credibility and to defend the rights of its member states.

“Greece and Cyprus are pillars of stability in the region. We cannot change geography, that is why we make a call for cooperation to all sides, on the condition that they respect the international and the European law. This is the main pillar of our foreign policy,” Christodoulides concluded.