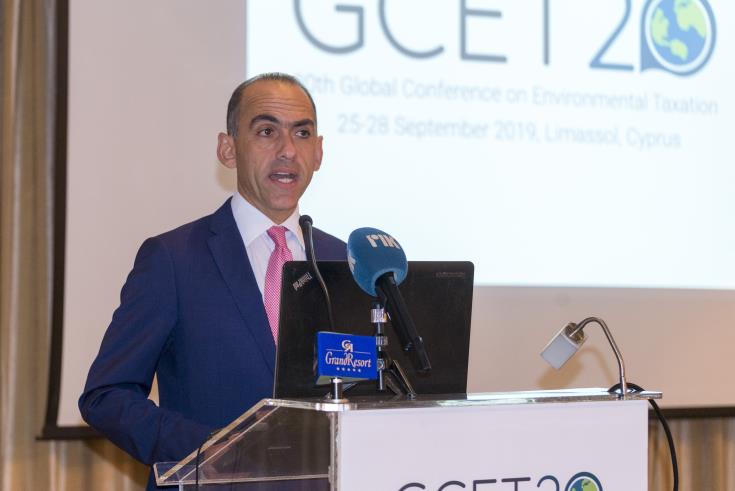 Minister of Finance Harris Georgiades said on Thursday that the government would introduce in 2021 a “Green Tax Reform”. Georgiades was speaking to the press on the sidelines of the 20th Global Conference on Environmental Taxation which took place in Limassol.

The Cypriot Minister said that modern trends of the economy are in the direction of environmentally friendly tax reforms, the so-called “Green Tax Reform” that increases taxation of energy-consuming products and on the other hand introduces tax reliefs primarily on labour, for example on social contributions paid by employees and employers.

He noted that Cyprus is moving in that direction and announced that his Ministry is currently finalizing a policy proposal, which will be launched for public consultation in early 2020, so that it could be implemented by 2021.

He continued by saying that the Ministry of Finance, was in contact with the academic community and with the European Union in order to finalize that proposal.

At the same time, the Minister clarified that “this should be a fiscally neutral tax reform”. As he said, the reform would be introduced, in order for Cyprus to achieve its binding environmental goals and to boost competitiveness and job creation.

During his speech at the Conference, Georgiades pointed out, that even though he would not be able to take the lead in that effort, as he stands down as a Finance Minister in a few weeks,  he was confident that the reform effort would be successful  and he would personally remain engaged and continue to offer his support.

The three-day conference on the impact of fiscal reforms on the environment and economic growth was attended by experts from all over the world.

By In Cyprus
Previous articleCyprus President rejects Erdogan’s allegations, outlines vision to end the unacceptable status quo
Next articleArgakas youths arrested, file complaint against police for shooting at them