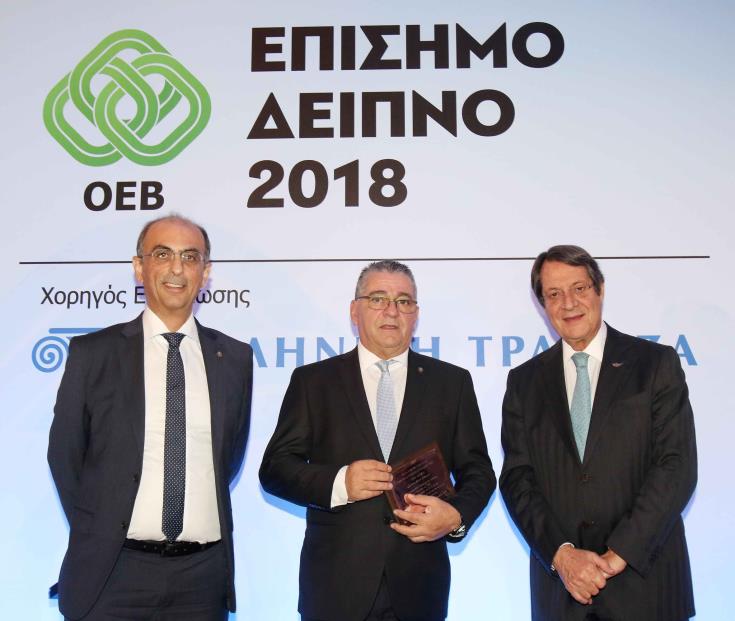 President Anastasiades assured Thursday that the government will continue to work with determination and responsibility to consolidate the sustainable development of the economy and to boost the excellent prospects of Cyprus’ main productive sectors, in a speech at an official dinner of Cyprus Employers and Industrial Federation.

He also said that upgrading of research and innovation issues under a Deputy Ministry, would significantly contribute to the necessary modernisation of the sector.

The President expressed the need to improve governance in the field of research and innovation and reminded that the Cabinet decided to establish the National Council for Research and Innovation and to adopt the institution of the Chief Scientist, with the aim to encourage innovative entrepreneurship.

In addition, Anastasiades announced that within two weeks he intended to invite his fellow candidates in the last presidential elections to cooperate in order to achieve a series of reforms, taking into account the proposals that they had submitted.

As he said, 26 of the proposals in the programs of his fellow candidates were feasible, as well as 56 others that were common between all candidates.

Referring to the reforms that the government was planning the President said that they would lead to the enhancement of the competitiveness of Cypriot businesses and would create an even more attractive environment for domestic and foreign investment.

Referring to the banking sector, the President said that the Government, in full compliance with strict supervisory, transparency and compliance rules, had achieved a significant consolidation of the sector and a healthier basis for capitalisation, liquidity, profitability, loan approvals and restructurings. He also stressed the reduction in non-performing loans (NPLs) from € 28.4 billion to less than € 12 billion.

The President also said that he was expected a more rapid response to the problem of NPLs, after the recent expansion of the Insolvency Framework, the improvement of the effectiveness of the legislative framework and the promotion of the “Estia” Scheme, to protect the main residence.

He also said that the establishment of the Asset Management Company, to manage the NPLs and other assets of the Cyprus Co-operative Bank, was a new important source of public revenues arises that would makes public debt absolutely viable.