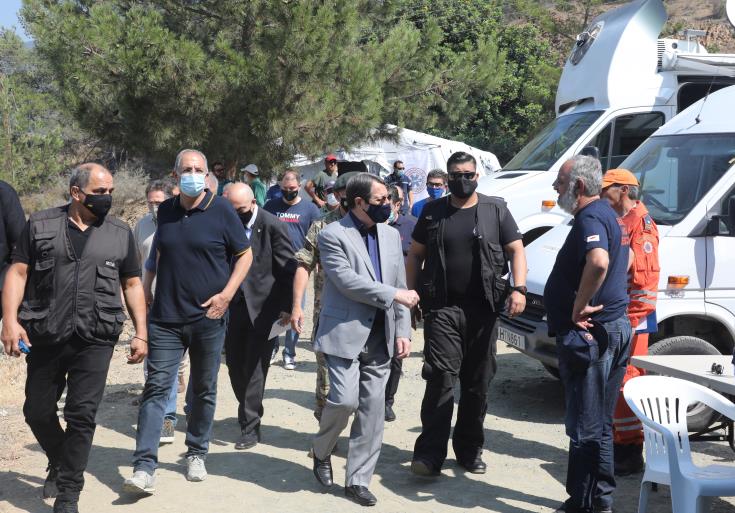 Measures to help those affected by the devastating fires in Cyprus over the weekend were decided during a meeting on Sunday at Vavatsinia with the participation of all relevant services.

Deputy Government Spokesperson Niovi Parisinou said that after the successful aerial firefighting by Greek and Israeli planes, the Fire Service and Forestry Department inspected the communities that were affected and said they are now safe.

A meeting chaired by Interior minister decided that delegations from the district administration of both Larnaca and Limassol will begin work to assess the damage, following orders by the President of the Republic. This procedure will be completed by Tuesday so that compensation can be given.

In addition, more than 28 people who have lost their homes will be temporarily housed at hotels in Nicosia.

Those affected will also receive lump sums on the basis of criteria which will be determined by the Ministry of interior and presented to the cabinet. In the meantime, the power supply is expected to be restored at Eptagonia, Klonari and Akapnou communities while generators will be taken to Agioi Vavatsinias, Odou, Oras, Arakapa and Dieronas.

Efforts to restore the power supply at Melini, Sikopetra and Profiti Elia continue as these communities were greatly affected by the fires. These areas will be patrolled by Police and an ambulance will be stationed in the area until things return to normal.

She also said that instructions were given to people to return to their homes if they are deemed safe.

Parisinou thanked the services and volunteers for helping put out the fires, noting however that complacency is not allowed until all fires are completely extinguished.

Cyprus Education, Culture, Youth and Sports Minister Prodromos Prodromou said the damage is extensive. Visiting schools which were damaged by the fires, he said that all government services will stand by the people affected.

He also said that many teachers have volunteered to help and on Monday, the principal and members of Lefkara Lyceum will be at the school to discus ways to support the schools and kindergartens of Iamatiki which was affected. Schools at Hirokitia will also open on Monday for children whose parents want to send them for summer schools.