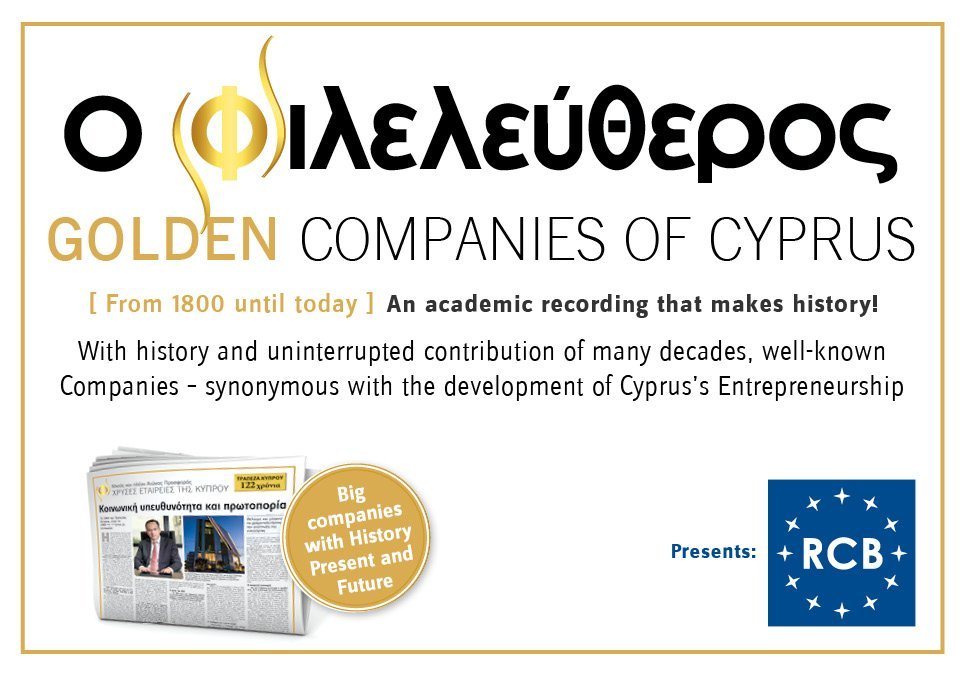 A few months ago, Phileleftheros began a big effort to academically record part of the financial history of the country and its businesses, presented by RCB BANK.

It aimed to record the history of companies and organizations, which with their presence left a positive mark on the Cypriot economy and contributed to the development of our country.

On 13 June, the Media Organization “O Phileleftheros” will start publishing, in all its Media, the main historic elements and landmarks of companies and groups with a presence in economic entrepreneurialism, equal and older than the Republic of Cyprus, which has already celebrated 61 years of life.

The presentations will be adorned with testimonies submitted by the current officials of the companies, through interviews that do not follow the usual stereotypes. Most times they are interviews laying down the people’s souls.

From the many elements that have already been collected, interesting stories emerge as well as aspects of companies unknown to the public and very little known even within the companies and organizations themselves.

Aspects connected with the people themselves, the society, the difficult times this country has gone through, its history, the landmarks, the good but also the difficult times. Parallel stories and stories related to the struggle for social well-being, for release from loan-sharking, for the freedom of this country.

The common denominator of all is the existence of people, pioneers for their era, visionaries, insightful, courageous, fighters of life and everyday activities.

The examples are many. Like the one of Panagis Sykas from Lania (hence the surname Lanitis), who 150 years ago was the leader and founder of the Lanitis Group of Companies.

Also, the example of Anastasios Stefanides, a refugee from Asia Minor, who came to Cyprus and 100 years ago opened a small shop in Ermou Street in Nicosia. Moreover, the example of Panagiotis M. Tseriotis, who began his business activity in a small office in old Nicosia in 1916.

The example of Louis Loizou, who 86 years ago laid the foundation stone of the Louis Group of Companies and is seen as the father of tourism in Cyprus.

Furthermore, a remarkable example is that of the Bank of Cyprus, with a history beginning in 1899-1900 with the cooperative “Nicosia,” which a few years later became a “société anonyme, under the name Bank of Cyprus, for a duration of 30 years and with a capital of 200,000 pounds divided into 50,000 shares of four pounds each.”

Also the examples of Geo Pavlides with roots reaching back to 1929, of KPMG, of Karamondanis, and several other companies.

Behind the companies of Cyprus lies a wealth that must be recorded in detail and in depth because it risks to be lost.

The Media Organization “O Phileleftheros” with the help of the companies and organization is setting the pace today.

It is opening a big chapter and a window into a huge wealth that is unrecorded and very important for the history of our country, presented by RCB BANK.