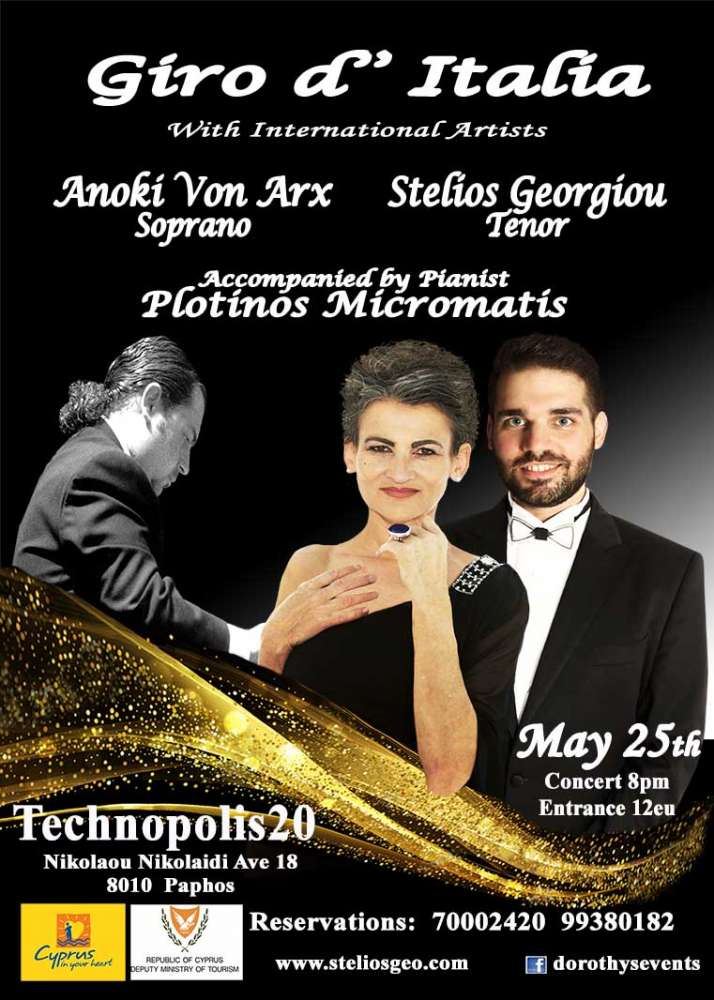 Anoki Von Arx (Soprano), Stelios Georgiou (Tenor) and Plotinos Micromatis (Pianο) will perform a selection of Neapolitan Songs and Arias throughout the ages. Their goal is to share with the audience these beautiful songs of Italy and beyond.

Songs that are unforgettable, romantic and fun, which are vital ingredients in life.

The concert will take place at Technopolis 20, on the 25th of May at 8pm.

Entrance: €12
Reservations are necessary at 70002420 (calls only).
Sponsor: Deputy Ministry of Tourism

Stelios Georgiou was born in Limassol, Cyprus. He began his music education at the age of eleven with piano, theory and harmony classes with Christina Shiakalli Frantzeskou and singing lessons with Natalia Nord. He was awarded a BMus with Honours in Music & Performance at Kingston University, UK. where he had singing lessons with the renowned baritone Jeffrey Black. He then pursued a Master’s degree in Performance & Opera from the Royal Northern College of Music, under the supervision of baritone Quentin Hays.

While studying towards his degrees he was an active member of the Kingston University Chamber Choir and the Royal Church School of Music Choir and would often perform as a soloist in venues such as the Canterbury Cathedral UK and other locations in Ireland, Norway, Italy and Austria.

Additionally, Stelios received a choral Scholarship from St. James’ Church in New Malden, while at the same time, he was a member of the Riverside Opera Chorus in Kingston upon Thames, under the direction of Oliver-John Ruthven.

He gained a certificate from the International Vocal Artists Academy of Payerbach- Austria where he had singing lessons with the renowned Russian baritone Vladimir Chernov and the world-class expert on Bel Canto vocal technique Olga Toporkova.
Stelios is currently teaching voice at various Music Schools across Cyprus.

Anoki Von Arx brings a unique element to the Opera. Before performing each aria Anoki enchants the audience with the story of the musical piece, and the Opera from which it originates. Bringing the characters in her tale to life, the audience can’t fail but to be mesmerized by her beautiful voice and magical performance. After an international dancing career, she devoted herself to opera singing. A rare soprano sfogato,, her voice covers the entire spectrum from high and dramatic soprano to mezzo. In 2010, she started to combine opera singing with Break dance, and Hip Hop, placing her timeless voice art in surprising contexts and creating productive contrast. The multi-talented star recently completed a successful tours in Vienna and the United States of America.

Plotinos Micromatis, born in Cyprus, has been performing since the age of eight as well as recording for Cyprus national radio and television.

His first professional engagement was a recital with works by Telemann, Beethoven, Chopin and Schumann, which he gave when he was fifteen years old.

In 1987 he won the Ρrix Ravel Competition, held in Nicosia, and in 1988, following his win at the national competition, he represented Cyprus at the 4th Eurovision Competition for Young Musicians which was held in Amsterdam, the Netherlands.

After, he completed his studies with Pitsa Spyridaki in Cyprus, Plotinos moved to London in order to study at the Royal College of Music and later at the University of London (Trinity College of Music).

He holds performance diplomas of the Royal College of Music, the Guildhall School of Music and Drama, as well as a Master of Music degree from the University of London.

Currently based in Nicosia, Cyprus, Plotinos is equally “at home” performing solo recitals, chamber music with singers and instrumentalists and as soloist