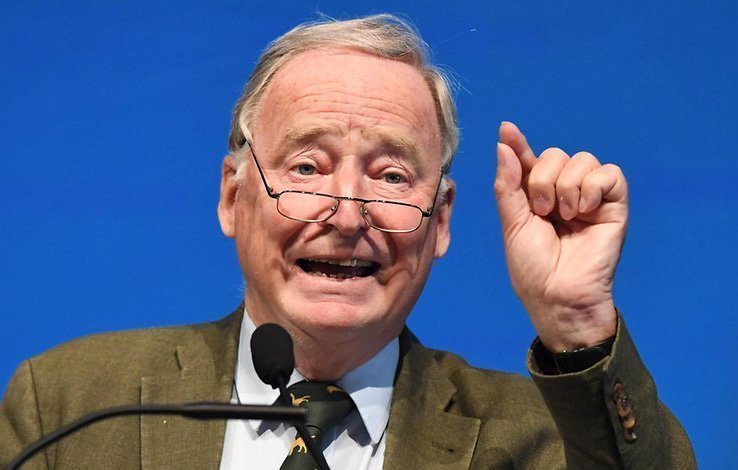 German Chancellor Angela Merkel should not have taken part in a ceremony in France on Sunday marking the centenary of the Armistice as it is an event for the “winners” of World War One, said the leader of the far-right Alternative for Germany (AfD).

Germany lost the war and Merkel’s participation in a ceremony for the former allies amounted to an attempt to rewrite history, AfD co-leader Alexander Gauland said.

“We can’t put ourselves in a historical situation that clearly favours the winner and walk alongside Mr. Macron through the Arc de Triomphe,” he said, referring to the famous Paris monument.

Gauland’s comments stood in marked contast to the themes of reconciliation and the need for vigilance against resurgent nationalism which characterised the official commemorations in London and Paris for the millions killed during World War One.

With U.S. President Donald Trump and Russian President Vladimir Putin sitting just a few feet away, French President Emmanuel Macron denounced those who evoke nationalist sentiment to disadvantage others, calling it a betrayal of patriotism and moral values.

In London, Britain’s royal family was joined by German President Frank-Walter Steinmeier, who become the first German leader to lay a wreath at the Cenotaph war memorial in an historic act of reconciliation.

The anti-Islam AfD entered the German parliament for the first time last year, drawing support from a broad array of voters angry with Merkel’s decision in 2015 to welcome almost a million, mainly Muslim asylum seekers.

Its leaders have been rebuked for comments that appear to belittle the Nazi dictatorship or suggest that history books should be re-written to focus more on German victims.

In a rare public display of emotion, Macron and Merkel held hands on Saturday during a poignant ceremony in the Compiegne Forest, north of Paris, where French and German delegations signed the Armistice that ended the war, one of the bloodiest in history.