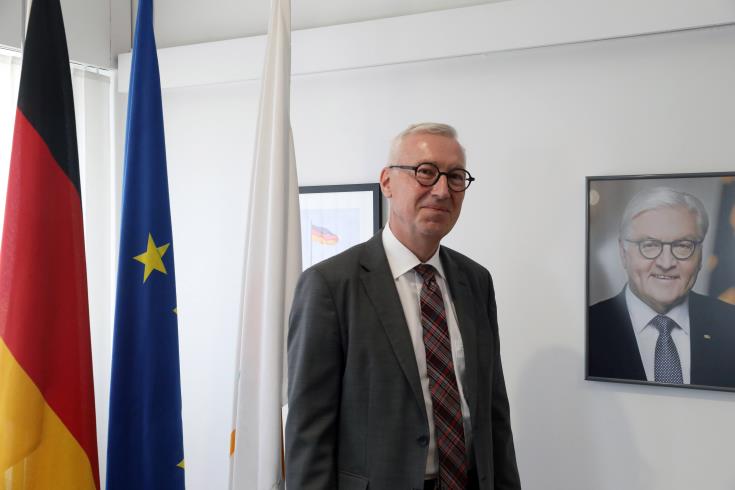 Germany, which assumed the presidency of the Council of the EU on July 1, is prepared for hard and difficult discussions and compromises on the urgent issues facing the European Union, the country’s ambassador to Cyprus told reporters during a presentation of the priorities of the six-month rotating Presidency.

Franz Josef Kremp said difficult and intensive discussions would take place in the coming months, particularly on the Multiannual Financial Framework (MFF), the EU’s plan to recover from the pandemic, as well as Brexit. He said that Germany would try to find consensus and compromises on these issues, but also on foreign policy issues concerning EU’s immediate neighbourhood, including the Eastern Mediterranean.

“We have to show a common approach towards our neighbourhood and try to solve the problems there,” he said referring to the situation in Iran, Syria, Eastern Mediterranean, South Africa and Libya. In all these topics, he said, EU had given an input and is only strong when it is able to act in unity.

Replying to a question on tensions in the Eastern Mediterranean, especially concerning Turkey, he said that the EU has in several resolutions of the European Council and the Foreign Affairs Council declared its full solidarity with Cyprus in this issue.  He added that the EU had also decided on measures unanimously.

He also stressed the need for unity in order to achieve that, saying that what’s priority for one member-state was not a priority of another.“You have to see where you find the line of compromise that allow EU to comes to a common position”, he said.

He also said that the messages that were coming from European capitals, show that there’s willingness to compromise by member-states.

“We are prepared to have difficult and intensive discussions and we count that in the end the spirit of solidarity and unity will prevail, otherwise we will have a major crisis”, said Kremp.

He also noted that he hopes for a deal this month, because it also has to be approved by the European Parliament and national parliaments, which is a time consuming process.

“Yes, we are worried and concerned about the latest rounds of talks which were not so substantial as we wanted them to be,” he said.

He added that, as Chancellor Merkel has said, EU must be prepared for a no – deal Brexit and must start thinking about contingency planning in case there’s no agreement.

German Presidency’s priorities
———————————————-
Referring to the key priorities of the Presidency, Kremp referred to coordinating EU efforts to overcome the COVID-19 pandemic and agreeing on the MFF and Next Generation EU instrument. Concluding negotiations on the future relationship with the UK, is also a top priority.

He also referred to the goals of advancing the EU’s green and digital transformation, strengthening European solidarity and social cohesion, making progress on the EU’s migration and asylum policy and strengthening the rule of law as a key foundation of the EU.

Foreign policy priorities include stabilizing the EU neighbourhood, partnership with Africa, a united position on China and strengthening the EU’s capacity to act at the global level.
(CNA)