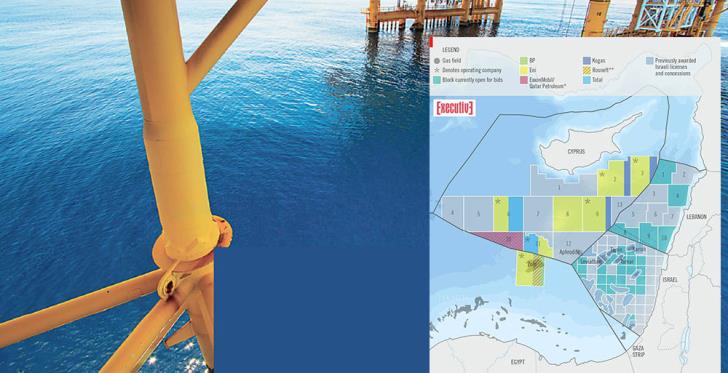 The discovery of natural gas in the region of the Eastern Mediterranean has informed the interest of the world’s big powers, without the engagement of whom energy development will be impossible. According to the German Marshall Fund think tank, the discovery of hydrocarbons has renewed the interest of powerful ‘players’ (United States, France, etc.) to work towards creating conditions for stability and broader cooperation with local powers.

As the report states: ‘The continued exploration and development of offshore energy resources in the Eastern Mediterranean and along the Atlantic coast of Africa can be an important contributor to the economic development of the southern Mediterranean. New finds and investments have given international stakeholders a strong interest in regional stability and cooperation, without which it will be difficult for Mediterranean energy projects to reach their full potential.’

According to the GMF, the prospect of ‘resource driven conflict’ in the eastern Mediterranean cannot be dismissed. However, energy is more likely to be a side issue in relationships animated by more fundamental disputes. The potential for conventional inter-state conflicts around the Mediterranean, while still quite real, is arguably a lower concern since ‘a durable Aegean détente’ has greatly risks of conflict involving Greece, Turkey or Cyprus from this quarter. There are more concerns in regard to Turkey’s relationship with Russia and it remains to be seen how Turkey’s early 2018 operations in Syria will affect regional balances in the Levant.

The report examined the strategic environment in the Mediterranean as a whole, as shaped by political and institutional trends around the region and on both sides of the Atlantic. It notes, in particular, two issues:

First, the evolving balance between national and multilateral strategies in transatlantic and global security will be felt in the Mediterranean.

Second, the Mediterranean security scene will be influenced by the evolution of EU policy toward the South.

A partnership process launched in 1995 as the Barcelona Process, and refashioned several times since, is likely to be increasingly central to the EU’s foreign and security policy ambitions, including permanent structured cooperation on security (PESCO). Disruptive events of a positive nature are also worth considering, including surprise progress in the Middle East peace process, a possible Cyprus agreement, or durable political agreements in Libya or Syria.

The report also states that the importance of a close collaboration between NATO and its southern allies is today more obvious than at any point in the history of the Alliance. Terrorism, migration, and human security are driving policy debates, alongside concerns over regional stability. The need to foster a shared security community in political and practical terms is evident especially since influences on Mediterranean security have become more diverse and global.

The report adds that counterterrorism and human security are at the top of agendas in both north and south. Border control, maritime, and cybersecurity are shaping policies around the region, and will be central concerns for security partnership in the years ahead:

The partnership programme in the context of which the report was prepared currently includes seven countries in North Africa and the Middle East Algeria, Egypt, Israel, Jordan, Mauritania, Morocco,and Tunisia. However, as the report adds, ‘New informal mechanisms should be developed to bring a range of relevant regional organisations and actors into the Dialogue. Practical priorities for MD countries include counter-terrorism and counterinsurgency training (and equipment and funding), intelligence sharing, border control, cyber-security ETC.’

‘Risks emanating from the Mediterranean and its hinterlands are shaping perceptions and policies in the United States, Canada, Britain, Germany, Belgium, and the Netherlands, to name just a few Alliance members outside the region. These risks are also felt indirectly in NATO’s east, where the threat from Russia naturally dominates perceptions and planning.’

The report also touches on the issue of migration: it states that the vast majority of refugees, migrants , and internally displaced persons are to be found around the southern Mediterranean, especially Jordan, Turkey, Lebanon, Libya, and Tunisia and predicts that ‘many, perhaps most of these people may never return home’, especially since, in North Africa, and to an extent in the Levant, migrants headed to Europe are drawn from places far from the Mediterranean itself, such as Nigeria and Bangladesh. The foreign fighter phenomenon is also discussed, since, Thousands of recruits from North Africa and the Middle East, Russia, and Europe, have travelled to Iraq, Syria, and Libya, to take up arms with jihadist groups .

Read the report in its entirety here.