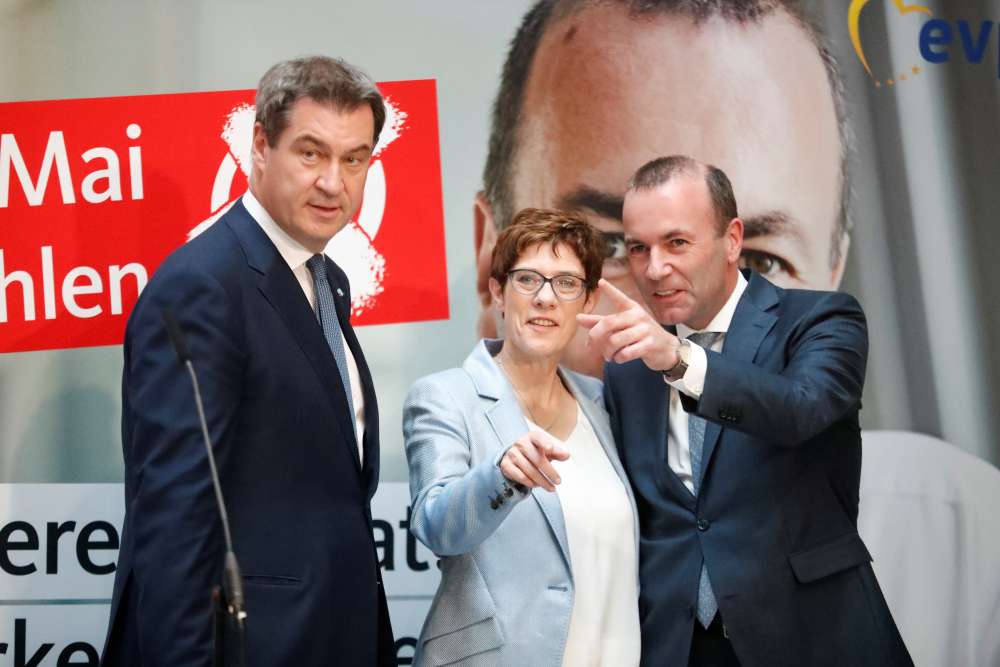 Germany’s Green party doubled its share of the vote in Sunday’s European Parliament election, leaping into second place behind Chancellor Angela Merkel’s conservatives and above the centre-left Social Democrats.

The far-right Alternative for Germany showed gains to 10.5% as Merkel’s party shed nine percentage points from 5 years ago but Europeans looking for signs of an expect nationalist surge will be focused on results in countries where voting ends later – notably in France at 1800 GMT and Italy at 2100 GMT.

Britain, which voted on Thursday but will publish results only after the Italians draw four days of elections across the 28-nation bloc to a close, is also expected to return a large number of anti-EU MEPs. These, however, may not hold their seats for long as the British negotiate to leave the Union.

Such indications so far tend to bolster hopes among Brussels officials that hostile-to-Europe, populist parties may fall short of their greatest ambition to form a solid bloc of 20% of the 751-seat chamber. That figure could, combined with milder eurosceptics, see 30% of seats held by lawmakers bent on thwarting mainstream leaders’ plans for closer EU integration.

In the Netherlands, which also voted on Thursday, an upstart anti-immigration party came only fourth with 11%, according to an exit poll, having been seen as a potential winner. The centre-left staged an unexpected comeback, helped by former Dutch foreign minister Frans Timmermans leading its EU-wide campaign.

In Austria, the party that took a lead in the renaissance of the far-right across the continent took a hammering, a projection showed. The far-right Freedom Party crashed out of government last week when a video emerged of its leader seeking favour from a supposed Russian oligarch in return for potential public contracts.

The party scored 17.5%, some six points below where it was polling before the scandal broke. The ruling centre-right of Chancellor Sebastian Kurz scored better by a similar margin.

However, in Hungary, the eurosceptic party of Prime Minister Viktor Orban, who has led battles against Brussels over immigration and attempts to limit media and judicial freedoms, was on track to beat pre-vote poll expectations, a survey found.

In Germany, the biggest member state and one of 21 countries that voted on Sunday, an exit poll for public broadcaster ARD showed the Greens on 22%, Merkel’s Christian Democrats (CDU) and their conservative allies on 28%, down eight percentage points from 2014, and the SPD slumping nearly 12 points to 15.5%.

The poll for public broadcaster ARD bore out predictions of a “green wave” that could push climate and environmental issues up the agenda in Brussels and bring the Greens into a possible four-party, pro-EU coalition at European level.

On a night when German political attention was focused on the CDU’s narrow defeat of Merkel’s national coalition partner the SPD in the small city-state of Bremen, a left-wing bastion, the far-right Alternative for Germany (AfD) raised its share of the EU vote by 3.4 percentage points to 10.5%.

Initial indications showed turnout was up in most countries, giving hope to EU officials who see an end to a 40-year run of declining participation as a mark of Europeans waking up to the importance of the EU legislature.

The anti-immigration League of Italian Deputy Prime Minister Matteo Salvini could find itself the biggest single party in the EU legislature if it can top the 28 seats polls indicate have been won by Merkel’s Christian Democrats and their allies.

As the European Parliament in Brussels prepared for the EU-wide count, Brussels police detained dozens of “yellow vest” protesters, part of a movement that began in France to voice discontent with the political establishment.

And outside the Belgian capital, a new far-right surge was evident in a national election which also took place on Sunday. The far-right Vlaams Belang surpassed expectations in the richer half of the country, running second in wealthy Flanders.

The European Parliament election will usher in weeks and possibly months of hard bargaining in Brussels over who will run EU institutions.

The Parliament as an institution has insisted that one of its own winning members should succeed Jean-Claude Juncker as president of the executive European Commission. But many national leaders, who will meet over dinner in Brussels on Tuesday, have said they will not be bound by that demand.