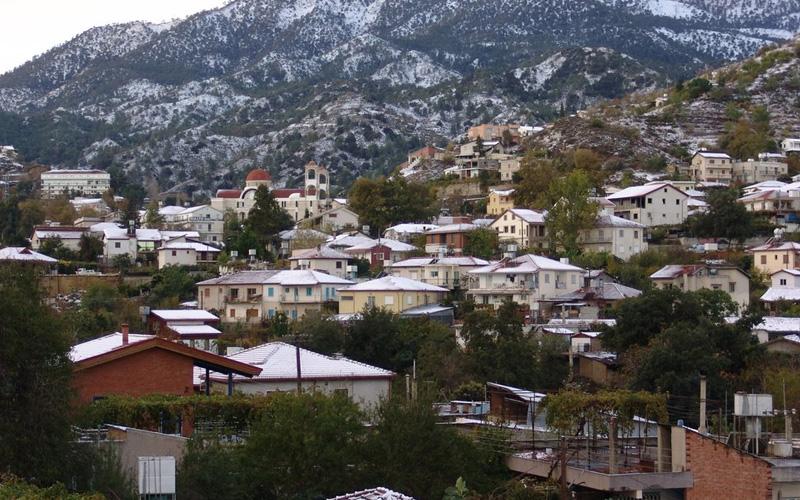 “You are a child of Klarios

And a grandchild of Olympus

You bathe in green

With the nightingale as company”

Galata is located 60 kilometres west of Nicosia in the beautiful valley of Solea. It has an altitude of 620 metres above sea level.

It is built in the two banks of the River Klarios that crosses through it and it is literally drowning in green. It is conjunct with the neighbouring community of Kakopetria. Both these twin hamlets receive thousands of tourists throughout the year.

Galata is famous for its tasty fruits that it produces in large quantities, especially apples of every variety, apricots, peaches, cherries, damsons, grapes, and others, as well as a variety of fresh vegetables.

‹‹ If one wants to enjoy a few unforgettable summer moments in Galata, he / she must sit at the village’s plaza. There, in the shadow of the age-old oak and the plane-trees with the Kargotis (Klarios) River, he / she will have unforgettable moments.

The houses of Galata -both the modern and the traditional ones -possess grace and beauty. One is particularly impressed by the wooden balconies and the wooden stairs of the old, traditional houses.

The tiled, inclined roofs, the local stone with which the houses’ walls are made, the latches and bolts, the gateways with their wooden transoms, all these are unfeigned witnesses of contrived folkloric architecture, which is unfortunately dying away as time goes by.

Chiefly however, what is found here is an excellent cultural heritage. The six Byzantine churches with the pyramid-like roofs and their rectangular tiles present to the visitor an unparalleled Byzantine architecture, mainly from the 16 th century››. (Journeys in Cyprus, G and M Karouze).

The History and Tradition regarding Galata — the village’s name

In very old times, there where legend merges with history, in the “Esso-Galata venue west of today’s village, some shepherds lived along with their flocks. The people who lived in the lower lands, the “katochorites” (lower-village inhabitants), went there in order to buy milk. The people would say amongst them “lets go over there to the ‹galataes› (plural, milkmen) and buy some milk”. Out of “galataes”, always according to tradition, came the name Galata.

Another tradition reports that the first settlers came from Galatia of Asia Minor and were named “Galates” (Byzantine era). So their small settlement was named Galata.

In his Chronicle (Annals), Leontios Machaeras reports that Galata belonged to the feud of the “Regas” (king) since 1196.

Galata is again mentioned by Leontios Machaeras in his Chronicle: ‹‹ … Learn…. These Maria said to me…. who took care of Mr. Erricos de Giblet in the village of Galata… ››

Thus we come to the conclusion that during the Frank Domination era Galata belonged to the De Giblet family.

In Mediaeval maps Galata is found marked under the name Golata and Galata (Iacomo Franco 1570, Galata).

This is what the Russian traveller, Vasiliev Barksy, wrote in 1735 regarding Galata:

He first visited Galata and then the village’s monastry of Podithou as he prescripes it.Then he returned back to the village were he spend the night.

‹‹ I went to the nearest village, named Galata, and spent the night close to a Christian along with my companions, which were priests. Let it be known that the villages of Solea have very few Muslim inhabitants, the majority being Greek Orthodox Christians, with many churches and priests. This village is the most beautiful of all. It has many fruit-bearing trees and running water and it is located next to the aforementioned river Klarios ››.

It is not known where exactly the village of “Lampadou” was built. However, the inhabitants of Galata as well as those of the surrounding villages -by tradition -starkly believe that this village or small settlement was located close to the country church of St. George the “Perachorites”, east of Kakopetria and to the left of the tourist road to Troodos.

The following reasons reinforce and confirm the view that Lampadou was located in the aforementioned area.

• According to St. John the Illuminator’s “Akolouthia” (service) of 1667, he came from ‹‹ the hamlet of Lampadou of the Galaton district ››.

• In an unpublished manuscript (Φ13 β) it was mentioned that: ‹‹ He was a Cypriot -St. John the Illuminator -from the region of the Solea district, from the village Lampadou ››.

• The Russian traveller Barsky who in 1735 spent one night in Galata, during his tour ‹‹ in all the monasteries of Cyprus ›› mentions: ‹‹ John -a saintly man -the Illuminator from the village of Lampadis, where the Saint was born and which now has been abandoned as I have ascertained when I was in Solea ››.

• In the service of St. John the Illuminator of 1774, h is mentioned as descending ‹‹ from the village Lampadistou of Solea››.

• Sofronios, the former Metropolitan Bishop of Leontopolis writes in his 1935 opus “Hagiology of the Orthodox Church”: ‹‹ Saint John the Illuminator, from Cyprus (October 4 th ). In no hagiographer have I encountered a memoir of him… He is celebrated in Cyprus, descending from Lampadou (a village by the hamlet of Galata) and thus having this name ››.

• At a small distance outside Galata there is a bridge called “giofyrin t’ Aerakleidkiou”, that is bridge of St. Herakleidios.

• There is a venue quite near Galata named “Moutte tis Lampadou” (nose or peak of Lampadou).

• In the Byzantine churches of Galata and Kakopetria there are frescoes depicting St. Herakleidios and St. John the Illuminator.

• ‹‹ Again the mention of a settlement under the name Lampas in the “district of the Galates” indicates that the settlement must have been in the Solea region (where the large village of Galata is) ››. (History of the island of Cyprus, volume II, Andros Pavlides).

From the Hagiography of St. Herakleidios -and also from other sources -we can conclude that he was an idolater (heathen) and a son of a certain Hierokleous or Hierokles, a heathen priest. It is known that the ancient people in Cyprus, like the ancient Greeks, believed in the twelve Gods of Olympus.

When the Apostles Paul and Varnavas came to Cyprus in 45 AD to preach the Nazarene’s religion, they passed by Lampadou that was close to Galata. Here the Apostles met the then young Herakleidios along with his father who -at that moment -was offering a sacrifice to the Gods. Hierokles invited them to take part in the sacrifice. The Apostles refused. They only asked to be shown the wrote to Pafos.

Hierokles allowed his son, Herakleidios, to escort the Apostles and show them the way.

As they were walking, the Apostles taught to Herakleidios the true religion of Jesus Christ and its superiority, in comparison with the religion he believed in. Herakleidios was thrilled with the new religion, became a believer, and was baptised. The Apostles ordained him as the bishop of Tamassos.

He lived during the 11 th century. His parents were the priest Kyriakos and his mother Anna.

He was nurtured with the essence of the faith and learned the holy scriptures from an early age. Because of his great love for God, he dedicated himself wholeheartedly to Him.

When he was 18 years old his parents were pressing him to be engaged, forgetting that their son was the fruit of their prayers and pleas.

After the engagement, John decided to break his engagement and dedicate himself to God. He announced to the parents of his fiancee his irreversible decision. In spite their bitterness and their feelings of being insulted, they pretended that they still had loving feelings for him. They invited him to dinner and poisoned him and as a result John was blinded. The scene of this lethal dinner with the poisonous fishes that they offered to him is depicted in a large portable icon, which is found in his monastery in Kalopanagiotis.

With the help of a servant who had the same name as he did, he leaves Lampadou and ascends to the monastery of his fellow-villager, St. Herakleidios.

He lived three years of angelic, ascetic life “teaching everyone that -if they want- they are able to live ‘close’ to Christ”.

He was 22 years old when he delivered his “snow-white soul” to the Lord.

Courtesy of the Community of Galata