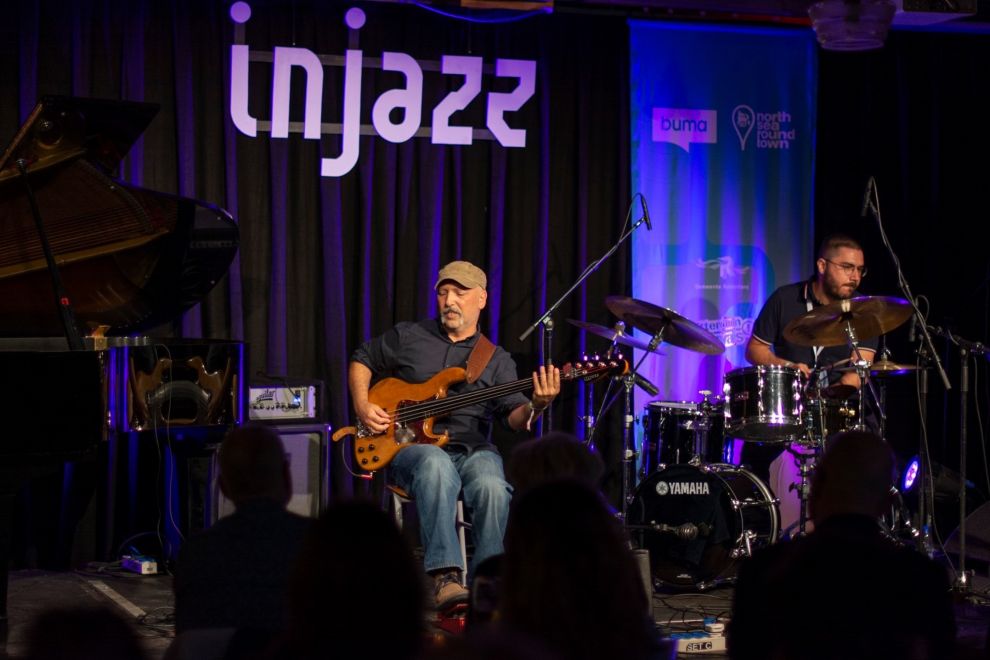 Gabriel Karapatakis trio is a new music group created by Cyprus-based bassist and composer Gabriel Karapatakis, to be presented at Technopolis 20 garden, on Thursday, 30th of September 2021, at 8pm. On stage will join him Christos Yerolatsitis on piano and Stelios Xydias on drums.

In the past few years Gabriel has initiated numerous ensembles and he has established his musical frame of reference and stylistic range of his projects. New band members’background knowledge and experience corresponds to configurations that have been internalized over time by a number of different styles. Gabriel Karapatakis trio is going to present Gabriel’s music from his previous CD’s/ collaborations and new compositions. The music is decidedly lyrical with accessible nature and attractive themes but might turns energetic with some truly exciting peaks. Strong melodies and interactive jazz, deal primarily in atmosphere and mood.

Christos Yerolatsitis (https://christosyerolatsitis.com/) is a Cypriot pianist, keyboardist and composer. With an interest in various music genres, Christos’s music can be characterised as colourful, intuitive and diverse. Christos moved to The Netherlands in 2008 where he lived for 9 years. Soon after his arrival he got into the Dutch jazz scene and performed all around the country with well-known artists, such as Benjamin Herman, John Ruocco, Simon Rigter, Ben van den Dungen, Ben Van Gelder and others. In 2016 he appeared in the biggest theatres of the country with the “Eef van Breen Group” in cooperation with the extremely successful theatre production “Borgen”. In 2017 he moved to Mumbai where he got employed as the head of the Piano department of the True School of Music, one of India’s biggest music schools. During his stay in India, Christos has performed with many bands in music festivals and jazz clubs and shared the stage with names such as Ranjit Barot (John Maclaughlin’s drummer) and Erik Truffaz (trumpet) as well as Indian Carnatic musicians like Sabir Khan (Indian Sarangi player) and Bangalore Amrit (Indian Khanjira). Christos is currently based in Cyprus working with various international bands as a leader and a sideman.

Gabriel Karapatakis studied music at the Mannes College of Music in New York and at the Rotterdam Conservatory in the Netherlands. He has extensively performed in the Netherlands, having collaborated with renowned jazz mucisians. Gabriel has given concerts in Cyprus, Greece, England, France, Germany, Australia, Serbia and Lebanon and he had paricipated at numerous festivals, including Kypria International Festival, Ruhrfestspiele Festival – Recklinghausen, and the European Jazz Festival Athens. In the past few years Gabriel has initiated numerous ensembles and he has established his musical frame of reference and stylistic range of his projects. With the Takoushis-Karapatakis Project, a world-jazz group, has so far released three critically acclaimed albums “Sympnoia”, “Seven Miles East”and “Colors of Another Sky” and with a cross-cultural trio, alone with the Berliner guitarist Hub Hildenbrand and the Cretan lyre player Zacharias Spyridakis, has released their first album “Nenemia ” in 2018. Music magazines are often attributing both band’s music to the music of the ECM record label.

By Lisa Liberti
Previous articleMeasures for the pandemic extended until 8 October
Next articleRapid antigen testing units – Wednesday, 22 September 2021; who is eligible