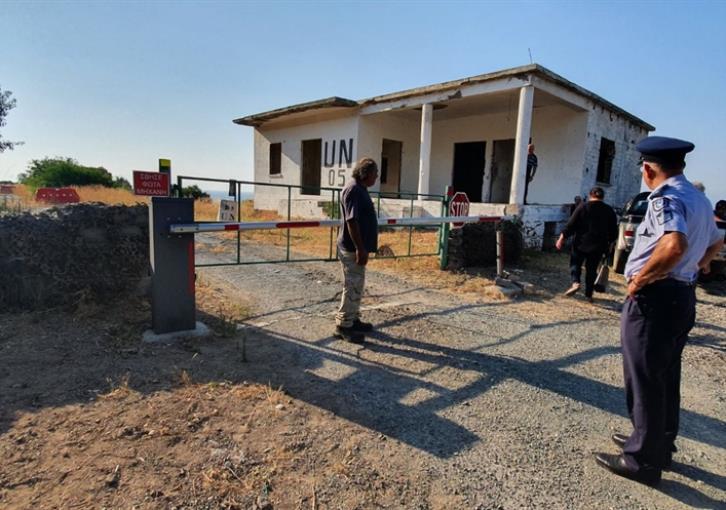 Greek Cypriot residents in the Tillyria area blocked passage to the occupied areas on Monday afternoon at Kokkina after the Turkish-Cypriot regime changed the rules for crossings and greatly inconvenienced Kato Pyrgos residents on their way back home earlier in the day by demanding a coronavirus test to let them return to their homes via the Turkish-held areas.

The passage was blocked outside Mansoura village in the presence of police members, philenews mentioned, after locals found out that despite new regulations by the occupying authorities, vehicles of the occupying army crossed to Kokkina through the Limnitis checkpoint as they normally do twice a week based on a relevant agreement between the two sides, without undergoing any checks.

Residents reportedly protested that while they have been inconvenienced for the last 57 years, the Republic of Cyprus continues to satisfy the demands of the occupying regime at every opportunity.

The Kato Pyrgos community leader Nicos Kleanthous told philenews during the impromptu protest that Tillyria residents have been inconvenienced since 1963 when the Tillyria area was cut off from the rest of Cyprus.

“It is inconceivable that while Tillyria residents are not allowed to go to their jobs, the Turks are provocatively allowed to cross through the community carrying supplies to the army in Kokkina and to replace soldiers who travel there in buses,” Kleanthous said.

“Unfortunately, based on the new rules by the ‘health ministry’, Tillyria residents who cross to go to work need to show a PCR test every time they cross and every 72 hours,” he further explained.

Local Tillyria residents who attended the protest asked for action from the Greek-Cypriot authorities in response to the Turkish-Cypriot regime’s actions.

“We have unfortunately been too patient,” resident Charalambos Patsalides said, “but this time locals were ready following the latest developments. We are protesting to send the message to everyone that we will take decisive action. It is not right to block passage to buses taking Tillyria residents to work or for an emergency in Nicosia and at the same time allow the Turks to cross through Tillyria whenever they like.”

Efstathios Theocharous, a Kato Pyrgos resident, said that he and his family are facing ‘enormous problems’ in their daily lives.

“I paid 140 euros to take the test with my son to be able to cross and now with the new rules we can’t cross to the occupied areas,” he said.

The UN peacekeeping force in Cyprus (UNFICYP) is engaging with the Turkish Cypriot side to clarify the situation at the Limnitis crossing point, the force’s spokesperson Aleem Siddique has told the Cyprus News Agency (CNA), invited to comment on the new rules imposed by the regime in Cyprus’ Turkish occupied areas, according to which people need to test for COVID-19 every 72 hours to cross the Limnitis checkpoint, and the subsequent protest of Kato Pyrgos residents.

Siddique told CNA that “UNFICYP is monitoring the situation as the crossing points, including Limnitis, very closely.”

“We are engaging with the Turkish Cypriot side to clarify the situation at the Limnitis crossing point,” he added.

The Republic of Cyprus put last month into effect a decision to reopen the crossing points – the operation of which was suspended due to the Covid-19 pandemic – except the one at Ledra street, for Cypriot citizens and all those who legally reside in the Republic. Those passing through are required to present a certificate saying that they are Covid-19 negative, that is no older than 72 hours prior to their crossing. Subsequently, the Turkish Cypriot regime announced it would open five checkpoints, including Ledra Street, to Greek Cypriots and permanent residents of the Republic who wish to cross. Two days ago the regime announced new rules for entrance from the checkpoints, illegal airports and ports.

Turkish Cypriots working, living or studying in the Republic, as well as Maronites and Greek Cypriots living in the north need to show a negative coronavirus certificate no more than 72 hours old but they need to retest every 15 days.

By Josephine Koumettou
Previous articleRosemary at the Old Port
Next articleEC sees GDP shrinking by 7.75% as pandemic takes toll on tourism