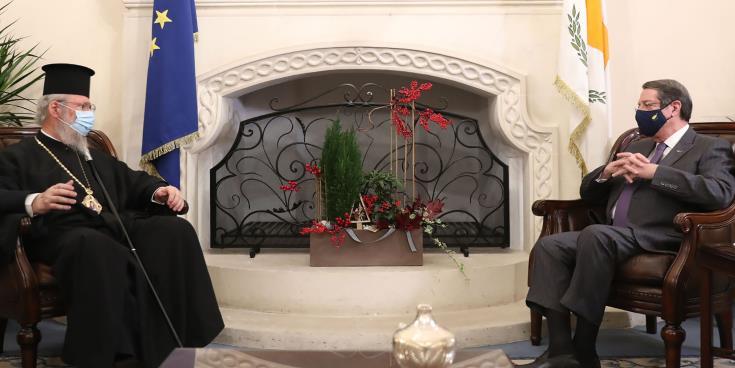 The position of the Greek Cypriot side on the solution of the Cyprus problem hasn’t changed, President Nicos Anastasiades said on Sunday.

He was commenting on an interview by Archbishop Chrysostomos to the Sunday edition of the daily Politis, who said that the President spoke of a two-state solution during a meeting they had but he then changed his mind.

In a written statement the President says that after the Crans Montana Conference, in July 2017, he had a series of meetings with many people, including the Archbishop.

He said that during those meetings he explained to him that the reason the Conference failed was Turkey’s insistence on issues related to Greek Cypriots’ security as well as the viability of the solution which would, at the end, topple the political equality to the favor of Turkey and the Turkish Cypriots.

The President further noted that he remains firm in the positions he forwarded to the UN Secretary General in September 2017 that the UN talks for a solution should resume from where they were left off in Crans Montana and on the basis of the joint statement issued in November 2019, after a meeting he had with the UN Secretary-General and the former Turkish leader Mustafa Akinci.

Cyprus has been divided since the 1974 Turkish invasion. The latest round of UN-backed talks in Crans Montana the summer of 2017 failed to yield results.

By Josephine Koumettou
Previous articleEXPLAINER-Where are we in the COVID-19 vaccine race?
Next article‘The beginning of the end’: Europe rolls out vaccines to see off pandemic