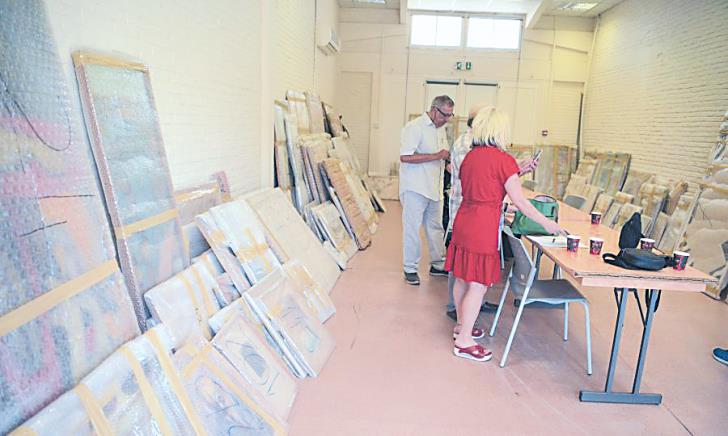 Art and audiovisual material exchanged last September between the Greek-Cypriot and Turkish-Cypriot communities as a Confidence-Building Measure will be exhibited for the first time at Ledra Palace on Monday, Phileleftheros reports.

The exhibition will be attended by Special Representative of the Secretary-General in Cyprus Elizabeth Spehar, President Nicos Anastassiades, and Turkish Cypriot leader Mustafa Akinci, as well as members of the UNDP and the EU.

The exhibition will showcase 50 works by Greek-Cypriot artists as well as audiovisual material from the CyBC archives on the work of Turkish-Cypriot artists.

The Greek-Cypriot co-President of the bi-communal Technical Committee on Cultural Heritage Androulla Vassiliou told Phileleftheros that due to space restrictions only part of the art can be exhibited at Ledra Palace.

The exhibition on February 3 and February 4 will only be open to members of the diplomatic corps, journalists, artists whose works will be on display, and relatives of deceased artists. Among attendees will be relatives of notable Cypriot artist Paul Georgiou.

At the end of the exhibition, the Greek-Cypriot art will be delivered to the Cultural Services of the Ministry of Education and Culture to be exhibited in the State Gallery of Contemporary Art – SPEL in order to be accessible to the public, Vassiliou said.

The research and curation of the printed material on the works has been assigned to Yiannis Toumazis, Director at the Nicosia Municipal Arts Centre.

Meanwhile, the Ministry of Education and Culture has announced the creation of a Special Committee to manage the 219 Greek-Cypriot works of art handed over in the exchange, which will have the responsibility of returning them to their lawful owners.

In September of last year, works of art and audiovisual material were exchanged between the two communities as part of a confidence-building measure agreed between Anastassiades and Akinci on February 26.

The conservation of the works was conducted in collaboration with the Nicosia Municipal Arts Centre and was financed by the European Commission.

Most of the works belong to the Famagusta Municipal Gallery and include works by Stelios Votsis and Christoforos Savva.

Some works were found at the Famagusta harbour, as they were shipped back there in 1974 following a loan to the UK for a temporary exhibition.

97% of the 219 Greek-Cypriot works have been identified, and the remaining few are hoped to be identified by their owners after they are exhibited at the state gallery.