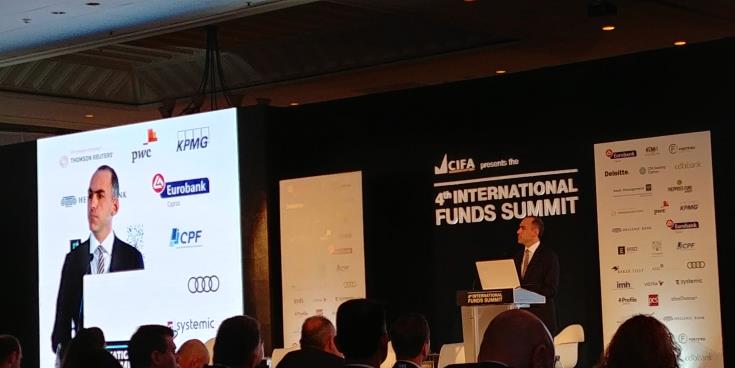 Fund Management is part of a “new beginning” for the Cypriot economy, as the industry is presenting significant growth following the 2013 financial crisis, Minister of Finance Harris Georgiades said.

“And I am delighted to note, that Fund Management, is part of this new beginning for the Cyprus economy,” Georgiades said, addressing the 4thInternational Funds Summit, noting that apart from tourism, shipping, real estate and business services, Cyprus’ productive base is expanding into new sectors such as higher education, innovation, offshore natural gas and renewable energy.

Georgiades highlighted the rise of Cyprus as a new destination for Fund Management as an excellent example of government, and industry, and regulators, working together to ensure that all the ingredients of success are in place.

Referring to the course of the Cypriot economy, Georgiades said that in the period of 2009 – 2014 Cyprus has lost 10.5% of its output, while in the four years ending in 2018 the economy will growth by an aggregate 16%.

“We have more than covered the lost ground and, if all goes well, we expect growth to remain above 3% annually for the next three years. These rates make Cyprus one of the fastest growing economies in EU,” he said.

He also referred to Cyprus fiscal surpluses, noting that this policy will be maintained in a bid to reduce the island high public debt from the current 104% of GDP to 90% of GDP by 2020.

Noting that Cyprus recovered from the financial crisis with no tax hikes, Georgiades said increased spending is not a sustainable option.

“And what we are working for, is stable, sustainable, long-term economic growth. In fact, we are staying clear of policies of tax and spend. This allows us to maintain tax certainty, to continue promoting tax breaks and incentives, and in this way, to safeguard consumer and business confidence,” he underlined.

On her part, Demetra Kalogirou, Chairman of the Cyprus Securities and Exchange Commission, referred to the rise of the fund management sector in Cyprus in the last five years.

Kalogirou said that total assets under management rose to €5.7 billion by September 2018 compared with €3 billion in 2017, marking an increase of 90%.

She also referred to the reforms in the legal framework and the tax breaks that have been implemented, fostering the fund management industry in Cyprus.

“We believe with all these regulatory changes and improvements, along with tax incentives especially designed for funds managers funds we create all the necessary preconditions for the healthy growth of the collective investment sector,” she said.

CIFA President, Angelos Gregoriades referred to the challenges facing the industry from potential disruptions due to technology and regulation.

“A big challenge will be to adapt to the wave of new regulations that is coming our way without losing momentum when it comes to create new products to meet client expectations,” he noted, adding the Cyprus funds industry needs to be proactive and to follow with speed new market trends.

Peter de Proft, Director-General of the European Fund and Asset Management Association praised Cyprus’ determination to develop its funds industry at a local European and international level, implementing the modernised legal and regulatory framework that is necessary based on European directives.

By In Cyprus
Previous articleMigrants rescued by cargo ship refuse to disembark at Libyan port
Next articleAnastasiades and Trudeau discuss Cyprus problem, regional and international matters