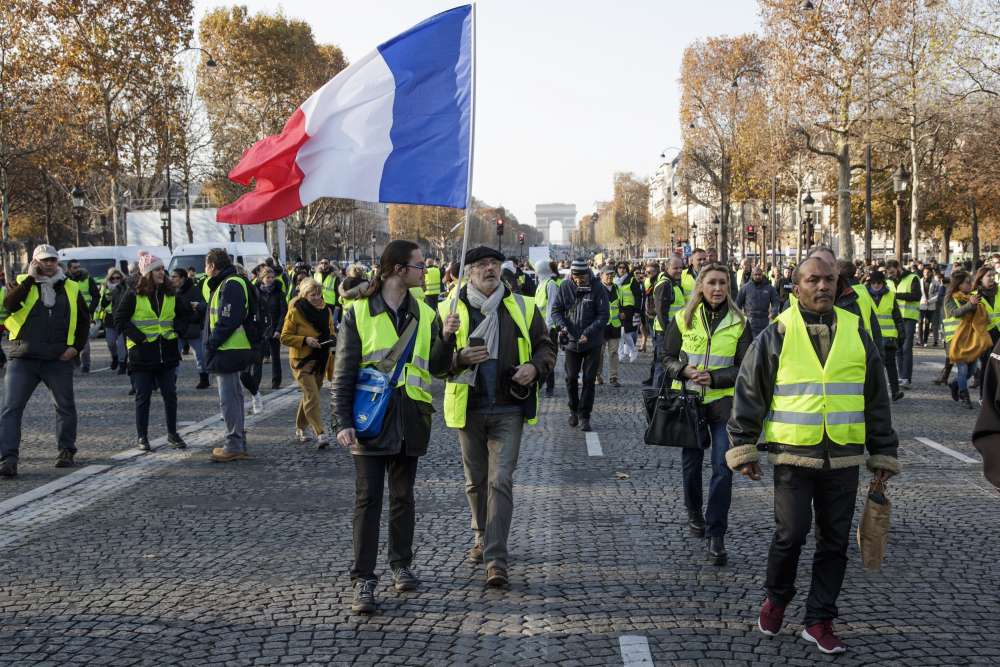 Thousands gathered on motorways across France on Saturday to protest against higher fuel taxes and President Emmanuel Macron’s economic policies, in a campaign of road blockades in which one protester was accidentally killed and dozens were injured.

Dubbed the “yellow vests”, protestors took to motorway sliproads and tunnel entrances, causing major back-ups at some highway tolls and blocking access to airports, including in Toulouse.

The demonstrations, coordinated on social media, and born out of a backlash against rising fuel prices, are the latest confrontation between Macron and dissatisfied voters who view the former investment banker as out of touch with ordinary people.

At a blockade in the southeastern department of Savoie, a driver panicked when protesters surrounded her car and she accelerated, hitting and killing a female demonstrator, French Interior Minister Christophe Castaner said in televised comments.

The traffic back-ups and stoppages caused several other accidents and run-ins with frustrated drivers trying to get around them, and police said 17 people were in custody.

At least 47 people were injured across the country, including three seriously, according to the interior ministry, which by midday estimated that close to 125,000 demonstrators were taking part in Saturday’s protests.

Police said they had used tear gas to clear the entrance to a tunnel under the Mont-Blanc mountain in the Alps.

Demonstrators were also on the march in cities, including around the port of Marseille and down the Champs Elysees in Paris. Some sported slogans such as “give us back our purchasing power” on the back of high visibility vests, which the protesters have adopted to symbolise their revolt.

“There are just too many taxes in France,” said Veronique Lestrade, a demonstrator on the outskirts of Paris, who said her family was struggling to make ends meet.

In 18 months in power, Macron has seen off trade unions and street demonstrations as he loosened labour laws and overhauled the heavily indebted state rail operator SNCF in a bid to reboot the economy.

Derided by political opponents as “the president of the rich” for measures such as the end of a wealth tax, Macron’s popularity has dwindled to new lows of 21 percent.

Tax hikes on fuel and tobacco as well as an increase to a social welfare levy before other tax cuts came into force have left some voters feeling squeezed.

The diesel tax increases, designed to encourage drivers to switch to more environmentally-friendly cars, were approved in late 2017 but bit when oil prices surged in October, angering some in the provinces who rely on their cars to get to work.

Ministers announced funds last Wednesday to help motorists on the lowest incomes, even if Macron is standing firm on his fuel policy.

Prices have eased this month, although protestors on Saturday had other complaints too, as Macron’s next test at the ballot box in European parliamentary elections in May 2019 looms.

“I happily voted for Macron in 2017, but he’s really making fun of us,” said Dominique Jouvert, 63, a retired civil servant demonstrating in Lyon’s city centre. “There’s no discussion to be had with him, no dialogue, he’s arrogant.

“What’s certain is that I won’t vote for him again.”