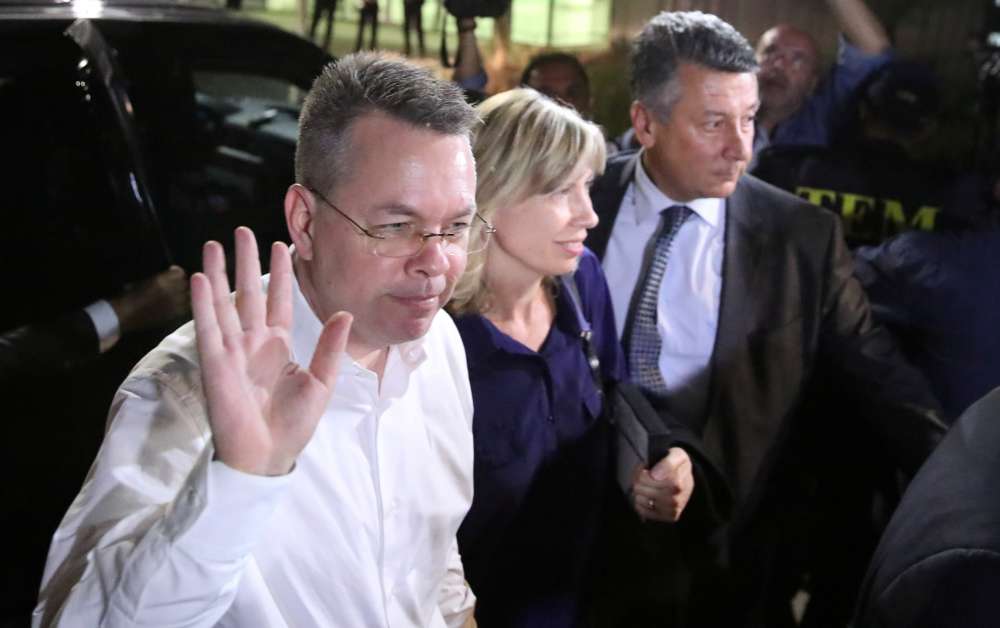 A U.S. pastor left Turkey on Friday after a Turkish court freed him from two years of detention, in a step that could improve U.S.-Turkish ties strained by differences over Syria, Iran and Ankara’s planned purchase of Russian military equipment.

An aircraft carrying Pastor Andrew Brunson cleared Turkish airspace and he was expected to land at Joint Base Andrews outside of Washington at around noon EDT (1600 GMT) on Saturday after a stop in Germany, a White House spokesman said.

Brunson was released after the court sentenced him to three years and 1-1/2 months in prison on terrorism charges, but said he would not serve any further jail time. Brunson, who has lived in Turkey for more than 20 years, was jailed two years ago and has been under house arrest since July.

The pastor had been accused of links to Kurdish militants and supporters of Fethullah Gulen, the cleric blamed by Turkey for a coup attempt in 2016. Brunson denied the accusations and Washington had demanded his immediate release.

Speaking to reporters in Cincinnati, President Donald Trump said Brunson would likely visit the White House Oval Office on Saturday. Asked if U.S. sanctions imposed on Turkey to try to win Brunson’s release might be lifted, Trump said there was no deal made for the pastor’s freedom.

Dressed in a black suit, white shirt and red tie, the North Carolina native wept as the court decision was announced, witnesses said. Before the judge’s ruling he had told the court: “I am an innocent man. I love Jesus. I love Turkey.”

The diplomatic stand-off over Brunson, who led a small congregation at the Izmir Resurrection Church, accelerated a sell-off in Turkey’s currency, worsening a financial crisis.

Brunson had been accused of links to Kurdish militants and supporters of Fethullah Gulen, the cleric blamed by Turkey for a coup attempt in 2016. Brunson denied the accusation and Washington had demanded his immediate release.

Witnesses told the court in the western town of Aliaga that testimony against the pastor attributed to them were inaccurate.

Brunson’s wife, Norine, looked on from the visitors’ area.

Brunson’s mother told Reuters she and his father were elated at the news. “We are overjoyed that God has answered the prayers of so many people around the world,” she said by telephone from her home in Black Mountain, North Carolina.

Trump has used the Brunson case to try to score points with evangelical Christians, a large part of his political base, ahead of the Nov. 6 midterm elections, which will determine whether Republicans keep control of Congress.

The heavily conservative constituency voted overwhelmingly for Trump in 2016. He has called Brunson a “great Christian”, and Vice President Mike Pence, the White House’s top emissary to evangelicals, had urged Americans to pray for Brunson.

“A lot of factors played into this,” Tillis said, adding the United States was trying to “get back to a point of a positive relationship” with Turkey.

The lira stood at 5.9225 to the dollar at 1700 GMT, slightly weaker on the day after firming 3 percent on Thursday on expectations that Brunson would be freed.

Relations between the two NATO allies are also under strain over U.S. support for Kurdish fighters in northern Syria, Turkey’s plans to buy a Russian missile defence system, and the U.S. jailing of a executive at a Turkish state bank in an Iran sanctions-busting case.

With Brunson’s release, attention may now turn to the fate of a Turkish-U.S. national and former NASA scientist in jail in Turkey on terrorism charges, as well as three local employees of the U.S. consulate who have also been detained.

Washington wants all these people released, while Ankara has demanded the extradition of Gulen. The cleric, who was lived in self-imposed exile in the United States since 1999, denies any role in the attempted coup.

Friday’s decision could be a first step to ease tensions, although Turkey’s presidency took issue with what it said was a prolonged U.S. effort to pressure its courts.

“It is with great regret that we have been monitoring U.S. efforts to mount pressure on Turkey’s independent court system for some time,” Fahrettin Altun, the presidency’s communications director, said.

Further moves which have been discussed include the return to Turkey of bank executive Mehmet Hakan Attila to serve out his sentence, the release of the U.S. consular staff, and agreement that the U.S. Treasury avoid draconian steps against Halkbank, the state lender.

By In Cyprus
Previous articleForeign Minister: West or East is a pseudo-dilemma, as Cyprus belongs to the EU
Next articleMerkel is weakened, says long-time ally Schaeuble