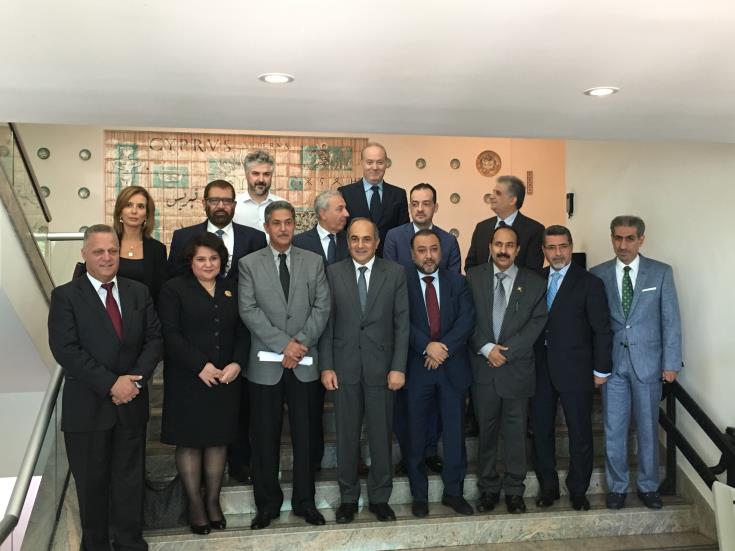 A working meeting convened this morning in the House of Representatives, in Nicosia, concerning the initiative to promote the instruction of Arabic in Cyprus. The meeting was attended by Ambassadors of Arab countries, who are resident in Nicosia, with Syllouris and Hambiaouris talking about concrete steps that are being made in this regard.

A committee to work out various details is being established soon while officials will also seek technical assistance from the Arab League.

After the meeting, Syllouris said that together with the Minister and the Ambassadors they took stock of the progress made and discussed how Ambassadors could contribute in this effort.

There is a committee consisting of the Ministry of Education, the House of Representatives, Frederick University and the Ambassadors, that will define the next steps for the promotion of the Arab language in Cyprus, Syllouris said.

He also noted that the issue of creating Arab Studies departments in other Universities in Cyprus remains open for those academic institutions that want to proceed.

We are already taking steps and implementing actions for the instruction of Arabic, said Syllouris, and noted that these actions will multiply with time.

The Minister said from his part that both his Ministry and the government of Cyprus support this initiative, following a relevant decision adopted by the Cabinet recently. The instruction of Arabic is being introduced in State Institutes of Further Education, in Adult Education Centres, as well as in some schools, said Hambiaouris.

“We have defined certain concrete steps” said Hambiaouris and noted that a committee will be established to determine the education material, instructors, language certification and the creation of Arab Studies departments.