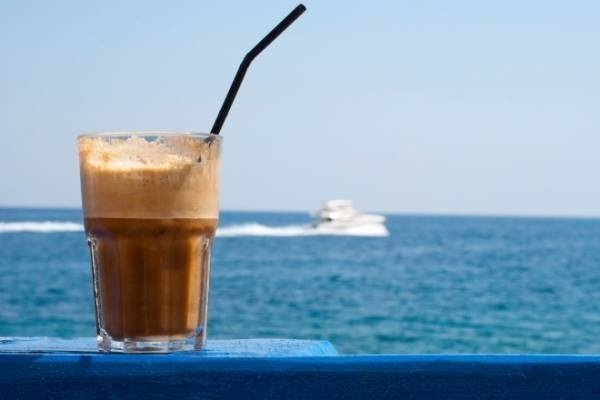 Frappé coffee (also Greek frappé or café frappé Greek: φραπές, frapés) is a Greek foam-covered iced coffee drink made from instant coffee (generally, spray-dried Nescafe), water and sugar.[1] Accidentally[citation needed] invented by a Nescafe representative named Dimitris Vakondios in 1957 in the city of Thessaloniki, Frappé is sold primarily in Greece and is among the most popular drinks in Greece and Cyprus, and is available at virtually all Greek cafés. The word frappé is French and means ‘chilled with ice’.[2] The frappé has become a hallmark of post-war outdoor Greek coffee culture.

Frappé was invented by a Nescafe representative in 1957 in Thessaloniki.

A variety of cold coffee drinks named “café frappé (à la glace)” are documented starting in the 19th century. Some were similar to slushes, others more like iced coffee.

The Greek version of café frappé, using instant coffee, was invented in 1957 at the International Trade Fair in Thessaloniki.[6] The representative of the Nestlé company, Giannis Dritsas, was exhibiting a new product for children, a chocolate beverage produced instantly by mixing it with milk and shaking it in a shaker. Dritsas’ employee Dimitris Vakondios was looking for a way to have his usual instant coffee during his break but he could not find any hot water, so he mixed the coffee with cold water and ice cubes in a shaker. This improvised experiment established this popular Greek beverage. Frappé has been marketed chiefly by Nestlé and is among the most popular drinks in Greece and is available at virtually all Greek cafés.

By In Cyprus
Previous articlePolice patrols on beaches, parks and squares
Next articleGreece at Home