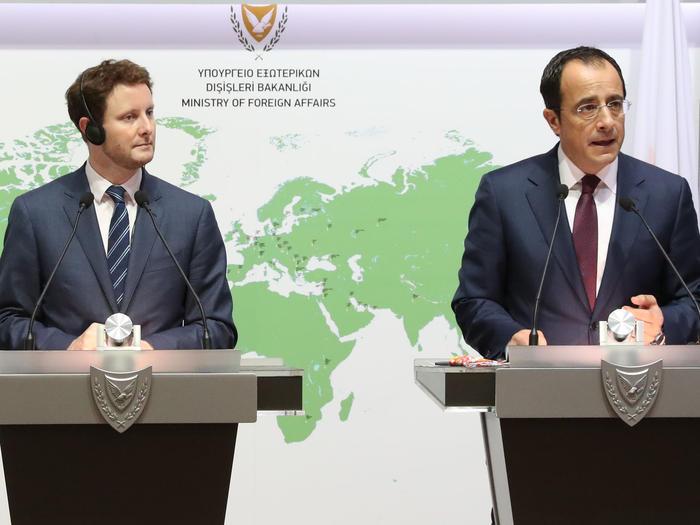 The EU should show its solidarity and be prepared to sanction Turkey over its unacceptable actions in the Eastern Mediterranean, French Minister of European Affairs Clement Beaune said in Nicosia on Friday.

After talks with Foreign Minister Nicos Christodoulides, Beaune also reiterated his country’s full solidarity with Cyprus and called on the EU to follow suit in the upcoming European Council.

As for Christodoulides, he expressed hope that Cyprus’ EU partners would display the same determination and solidarity as France.

An official announcement earlier on Friday said Beaune, who is on a working visit to the island, would also exchange views on bilateral cooperation, Migration crisis, EU-UK relations, the Multiannual Financial Framework, the Conference for the future of Europe and the COVID-19 pandemic.

After Christodoulides, the French official went on to a meeting with Cyprus President Nicos Anastasiades.

During their meeting President Anastasiades and Beaune also agreed on the need for the EU to examine all available means at its disposal in order to adopt a clear and decisive stance towards Turkey.

He will then meet with Defence Minister Charalambos Petrides with whom he will fly over Cyprus’ exclusive economic zone in a helicopter.

Their talks will cover the Common Security and Defence Policy and the developments in the Eastern Mediterranean.

The French Secretary for European Affairs will depart for Athens in the afternoon to meet with Greek Premier Kyriakos Mitsotakis.