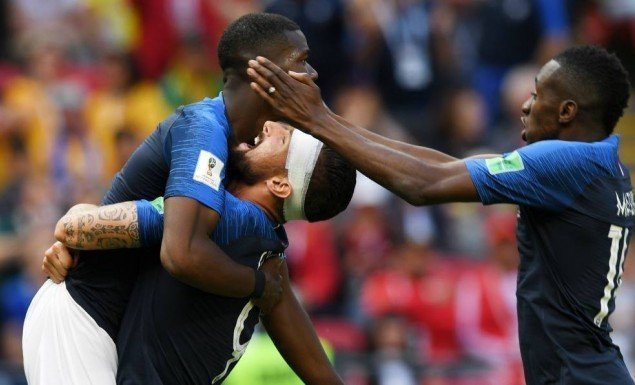 After 88 years of soccer players, coaches and fans crying foul, there is finally a second chance for a referee to confirm whether a penalty is indeed a penalty at the World Cup.

It did not take long for that rule change to play a major role in Russia.

France’s first goal in its 2-1 victory over Australia on Saturday, the third day of competition here, was a direct result of input from the video assistant referee system known as VAR.

The system — which has had extensive testing by World Cup referees in training, but to its critics, far too little in live matches — is being used for the first time in a World Cup. And though the thousands of Australian fans who made the long trek to Kazan voiced their displeasure with the decision it produced early in the second half Saturday, the new technology appeared, by most measures, to have worked as designed.

In the 54th minute, France’s star forward Antoine Griezmann went down in the penalty area after what looked like contact with Australian defender Joshua Risdon, who had appeared to clip Griezmann’s left heel while sliding in from behind for a tackle just as Griezmann crossed into Australia’s penalty area.

Kylian Mbappé, Griezmann’s 19-year-old teammate, pointed with both hands at the penalty spot, urging the Uruguayan referee, Andrés Cunha, to award a foul, but Cunha waved away the French appeals as play raced back upfield. Left behind, Griezmann lay on the grass in the sunshine — there was barely a cloud overhead — wearing the aggrieved look so many fallen strikers have worn through the decades in the game’s most prestigious competition.

But this is a new era in a sport so long resistant to change, and at the next stoppage of play, Cunha, who had been alerted to a possible error via an earpiece linked to a video assistant tracking the match in Moscow, paused the match for a review. Jogging to the sideline, he peered into a video monitor to watch a replay of his decision on the Griezmann incident.

Moments later, he returned to the field, blew his whistle and — to the Australians’ dismay this time — awarded a penalty kick. Griezmann coolly converted it with a curling left-footed shot, giving the French a 1-0 lead in the 58th minute.

The repercussions of the World Cup’s first VAR decision had been immediate — the whole review, from whistle to second look to whistle, took less than two minutes — but that the new system appeared to work as designed does not mean it will put an end to postmatch debates.

Australia coach Bert van Marwijk was adamant that a penalty should not have been awarded. Several of his players also expressed skepticism.

“Personally, I don’t think I’m a fan of it, to be honest,” Mathew Ryan, the Australian goalkeeper, said of VAR. “Us, as players, if we make a mistake on the pitch, we don’t get to stop the play and rewind it to correct it or whatnot. The officials do now, and obviously it was brought in to avoid calamitous errors and those sorts of things, and obviously there’s a bit of a gray area to what the referee decides and on it being conclusive.

“Now I’ve got to question what the definition of conclusive is. Because I don’t think the penalty decision was conclusive enough to overturn.”

“I am not going to complain with the use of video today because it was in our favor, obviously,” he said. “In our friendlies, we’ve already had situations when it was not in our favor. This is the way it is. We’ve been warned that in some situations, VAR can be used.”

After a slight delay — just long enough for observers to wonder if Cunha had heard from Moscow about the handball, which was clear but difficult to discern as it barely affected the ball’s trajectory — he awarded another penalty. This time, he did not bother to make a trip to the sideline. Under FIFA’s rules, the on-field referee has the final word on all VAR reviews, but also has the option of simply accepting the word of the VAR official, who has immediate access to television replays. It was unclear, however, if that happened in this case.

Australia captain Mile Jedinak, who was impossible to miss on the field with his long salt-and-pepper beard, did not waste the opportunity, converting the penalty with a fast-rolling shot as goalkeeper Hugo Lloris dived to his right.

The 3-minute-7-second gap between the goals was the shortest period between two penalties scored by opposing teams in a World Cup match.

The score then remained tied as the game moved deep into the second half. Few would have thought that would be the case, since France has a lineup brimming with young stars and is considered one of the favorites in Russia. Meanwhile, Australia, whose players generally earn their livings in less floodlit leagues, was widely considered a soft opening opponent.

But after allowing three dangerous shots on goal in the first six minutes of the game, Australia tightened its back line and slowed the pace.

“You look at the strike force they possess and with nearly all of their players playing at one of the biggest clubs in the world and at the highest level, and our defense really limited their opportunities to pretty much nothing,” Ryan said.

But individual quality ultimately made the difference. Paul Pogba, the Manchester United midfielder, created the winning goal in the 81st minute, slashing through the heart of the Australian defense with two deft passing combinations: the first with Mbappé, the second with Olivier Giroud, a second-half substitute.

Even so, it was not a reassuring day for France, even with three points and the early edge in Group C. The starting lineup Deschamps used Saturday had an average age of 24 years 6 months. The only starter who was not born in the 1990s was the goalkeeper, Lloris, who is 31.

“It’s not youth that caused it,” Deschamps said of his team’s stuttering attack. “If you don’t count today, in the last four World Cups, only once has France won its opening match. I’m not going to say Australia is a European power, but it’s not what some people think, that they don’t possess quality.

The next chance comes against Peru on June 21 in Yekaterinburg.