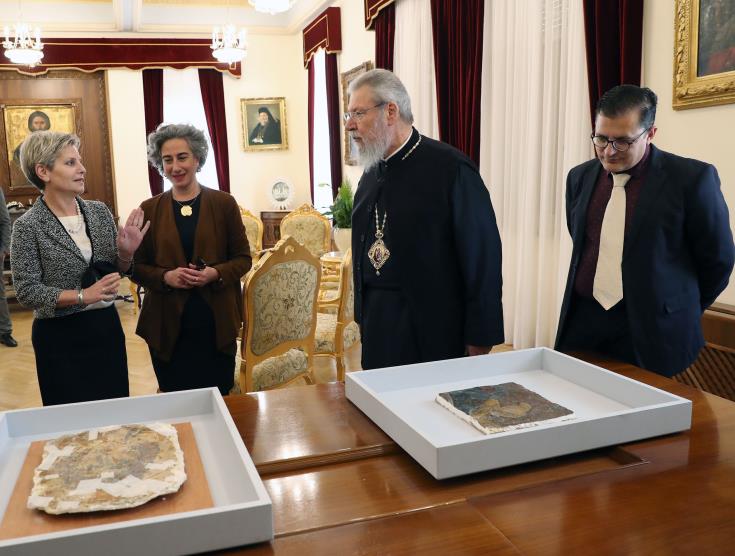 Minister of Transport Vassiliki Anastasiadou handed over on Friday to Archbishop of Cyprus Chrysostomos four fragments of frescoes which she repatriated from the Hague earlier this week.

Two of the fragments have been identified as belonging to the church of Panagia Apsinthiotissa, a Greek Orthodox monastery situated in the Turkish occupied part of the island. The third one belongs to the Church of the Virgin Mary in the occupied village of Assia, in the Famagusta District. Despite confirming the fourth fresco is Cypriot, its precise provenance is still unknown.

Archbishop Chrysostomos congratulated everyone involved in the repatriation of the frescoes, including the Antiquities Department Director and the police officer who handled the case.

He said the frescoes will initially be showcased at the Archbishop Makarios Foundation, in Nicosia, before been transported to the Antiquities Department for conservation purposes.

He also expressed the wish that they eventually return to the churches they belong, once the Turkish occupied territory of Cyprus is freed.

At the same time, he spoke of the Church’s determination to cooperate with the government, the antiquities department and all actors so that all looted religious artefacts can be repatriated.

We will spare no expense or effort in order for them to return, he assured. Archbishop Chrysostomos also said that during a meeting he is set to have with Cyprus President Nicos Anastasiades next week, the latter will have the opportunity to hear about the story behind the repatriation of the four frescoes.

On her part, Anastasiadou thanked Cyprus’ Ambassador in the Hague Elpidoforos Economou for his efforts and praised the cooperation between Church, government and the police which led to this outcome, noting that “the looting of our cultural heritage which has been extensive, constitutes a blow on our very human rights.”

According to the Minister, “the wound will only be healed once the artifacts return were they belong, our looted churches.”
She called on everyone to “continue the effort together.” She praised the Antiquities Department which will undertake the conversation of the frescoes and thanked NGO Walk of Truth for handing over the frescoes in the Hague.

On her part head of the Antiquities Department Marina Solomidou – Ieronymidou said that the role of the Legal Service, the Foreign Ministry, the police is crucial because in order to have a happy end the efforts must be coordinated.  “It is necessary to have a lot of persistence, patience, devotion and professionalism,” she pointed out.

She added that “I believe we have all the above; We have very capable people and we will be able to see through other repatriations.”

In a short statement, Economou referred to the devotion and professionalism of all involved and also spoke of their patriotism which is the reason recent efforts were successful.

More than 500 churches situated in the areas under Turkish occupation since 1974 have been destroyed, plundered and looted. The Cyprus government and the church have repeatedly protested to the UN, the World Council of Churches and many other international and religious organisations.

By In Cyprus
Previous articleOmbudswoman’s office dealt with 4,196 complaints in 2017 – report
Next article39 year old woman scammed citizens out of tens of thousands of euro