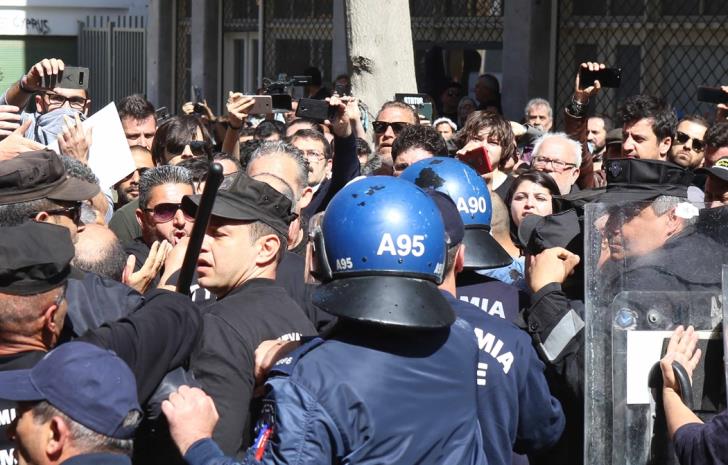 Four police officers were injured on Saturday after scuffles broke out when some 100 Turkish Cypriot protesters from breakaway northern Nicosia tried to push through to the closed Ledra Street checkpoint to the government-controlled areas.

The bi-communal protest, organised by Unite Cyprus Now, was against the government’s decision ten days ago to temporarily close checkpoints in the divided island because of the coronavirus scare.

Police also said in a statement that stones were thrown at the officers who were trying to prevent the Turkish Cypriot protesters crossing over to the government-controlled areas.

However, the demonstration was meant to be peaceful. And for quite a while demonstrators were sending the message that citizens of this country refuse to be separated.

Nonetheless, violence had broken out again at the first demonstration against this decision last weekend.

The temporarily closure of four crossing points along the buffer zone was also slammed by UNFICYP on Thursday.

However, a senior government official said the force has no competence on the issue and that this was a public health and not a political decision intended to free resources to step up screening at the other checkpoints which remain open.

The opening of the crossings since 2003 has allowed Cypriots freedom of movement across the island.

This contributed to a return to normal conditions and facilitated contact and interaction for those who wish to avail themselves of the opportunity.