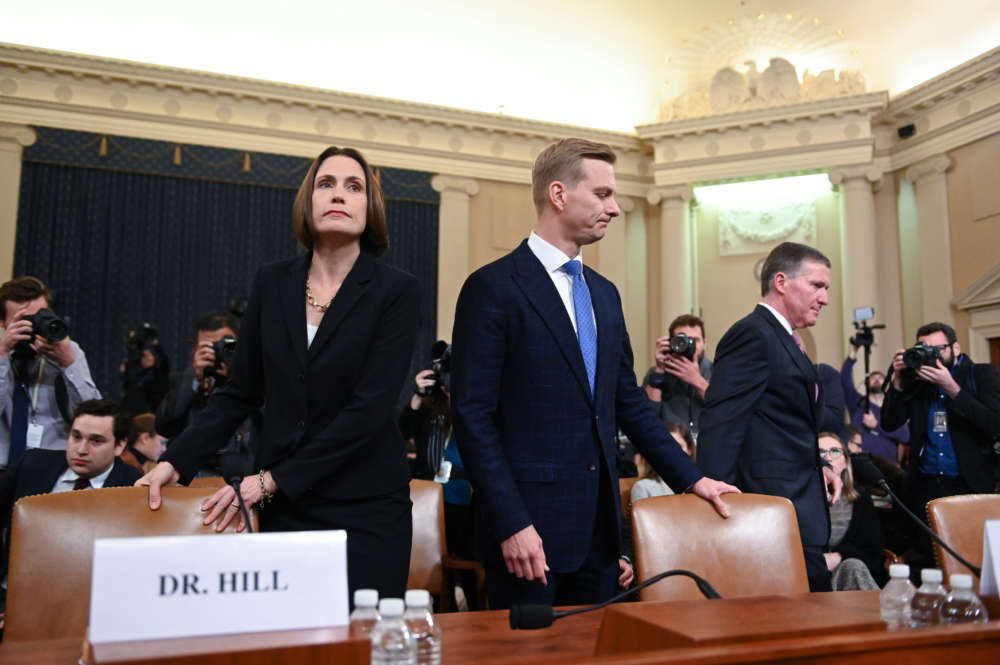 President Donald Trump’s former Russia adviser urged lawmakers in the House of Representatives impeachment inquiry on Thursday not to promote “politically driven falsehoods” that cast doubt on Russia’s interference in the 2016 U.S. election.

Fiona Hill spoke on the last day of public testimony scheduled before the Democratic-led House Intelligence Committee probing whether Trump improperly asked Ukraine to launch investigations that would benefit him politically in return for a White House meeting or the release of U.S. security aid.

Democrats argued that seven public hearings over the past two weeks had buttressed their case that Republican Trump acted improperly in asking Ukraine for investigations of Democratic former Vice President Joe Biden and his son Hunter Biden, and of whether Ukraine meddled in the 2016 U.S. election.

Republicans denied wrongdoing by Trump, questioned the credibility of a career diplomat who said he overheard Trump asking if Ukraine would carry out investigations and argued that Democrats aimed to thwart the will of the people by ousting the president.

If the Democratic-led House voted charges, formally called articles of impeachment, against Trump, the matter would go to the Republican-led Senate, where the White House said the president would welcome a trial on whether to remove him from office.

“President Trump wants to have a trial in the Senate because it’s clearly the only chamber where he can expect fairness and receive due process under the Constitution,” White House spokesman Hogan Gidley said in a statement on Thursday night.

“We would expect to finally hear from witnesses who actually witnessed, and possibly participated in corruption – like Adam Schiff, Joe Biden, Hunter Biden, and the so-called Whistleblower, to name a few,” Gidley said.

Gidley was referring to Democrat Adam Schiff, who is leading the impeachment inquiry as chairman of the House intelligence panel, as well as to an intelligence community whistleblower whose complaint helped trigger the investigation.

Trump has accused Biden of corruption without offering evidence. Biden, a leading contender for the 2020 Democratic presidential nomination, has denied any wrongdoing. A spokesman for Schiff declined comment.

It was unclear if the House panel would conduct further hearings.

In her testimony, Hill said some members of the panel appeared to believe that Russia and its security services did not meddle in the 2016 presidential race to support Trump, and that perhaps Ukraine did.

“This is a fictional narrative that has been perpetrated and propagated by the Russian security services themselves,” said Hill, who served until July as the director for European and Russian affairs at the White House National Security Council.

“In the course of this investigation, I would ask that you please not promote politically driven falsehoods that so clearly advance Russian interests,” she said during the hearing, which ended after more than five hours of testimony.

In a July 25 call at the heart of the inquiry, Trump urged Ukrainian President Volodymyr Zelenskiy to investigate Biden; his son Hunter, who had served on the board of Ukrainian gas company Burisma; and whether Ukraine interfered in the 2016 election.

The inquiry is also examining whether Trump’s temporary freeze of $391 million in congressionally approved security aid to help Kiev fight Russia-backed separatists in eastern Ukraine, was intended to pressure Zelenskiy to conduct the probes.

Democrats say Trump’s dealings with Ukraine amount to an abuse of power to pressure a vulnerable U.S. ally to dig up dirt on a domestic political rival.

Trump has denied wrongdoing, publicly criticized witnesses and described the impeachment proceedings as a “witch hunt.” His fellow Republicans call the proceedings a “sham.”

David Holmes, a career diplomat serving in the U.S. Embassy in Ukraine, testified about a July 26 phone call in which he said he overheard Trump ask Gordon Sondland, U.S. ambassador to the European Union, about the status of the investigations.

“So, he’s gonna do the investigation?” Trump asked Sondland, referring to Zelenskiy, Holmes said of the call, overheard while he was dining with Sondland outdoors at a Kiev restaurant.

“He’s gonna do it,” he said Sondland replied.

Holmes also testified that his work started to become overshadowed in March by Trump’s personal lawyer, Rudy Giuliani, who was pushing Ukraine to carry out the two probes.

In her testimony, Hill recalled a conversation she had with Trump’s former national security adviser John Bolton about Giuliani’s activities.

Bolton, she said, looked pained and “basically indicated with body language that there was nothing much that we could do about it. And then, in the course of our discussion said Rudy Giuliani was a hand grenade that was going to blow everyone up.”

Asked what she thought Bolton meant, Hill replied that Giuliani was “pretty explosive” and that the former New York mayor “was clearly pushing forward issues and ideas that would, you know, probably come back to haunt us and in fact I think that that’s where we are today.”

U.S. intelligence agencies and former Special Counsel Robert Mueller have determined that Russia interfered in 2016 with a campaign of hacking and propaganda intended to sow discord in the United States, boost Trump’s candidacy and harm his Democratic opponent, Hillary Clinton.

Hill warned lawmakers that Russia was gearing up to repeat its election interference activities in 2020.

“We are running out of time to stop them,” she said.

Devin Nunes, the top Republican on the committee, said the Democrats were trying to overturn the 2016 U.S. election.

“What you have seen in this room over the past two weeks is a show trial, the planned result of three years of political operations and dirty tricks, campaigns waged against this president,” Nunes said near the end of the hearing.

He and other Republicans also argued that Ukraine might have sought to interfere in the 2016 election in addition to Russia.

Schiff, the Democrat who chairs the House Intelligence Committee, said Trump believed he could act with impunity.

“There is nothing more dangerous than an unethical president who believes they are above the law,” he said.