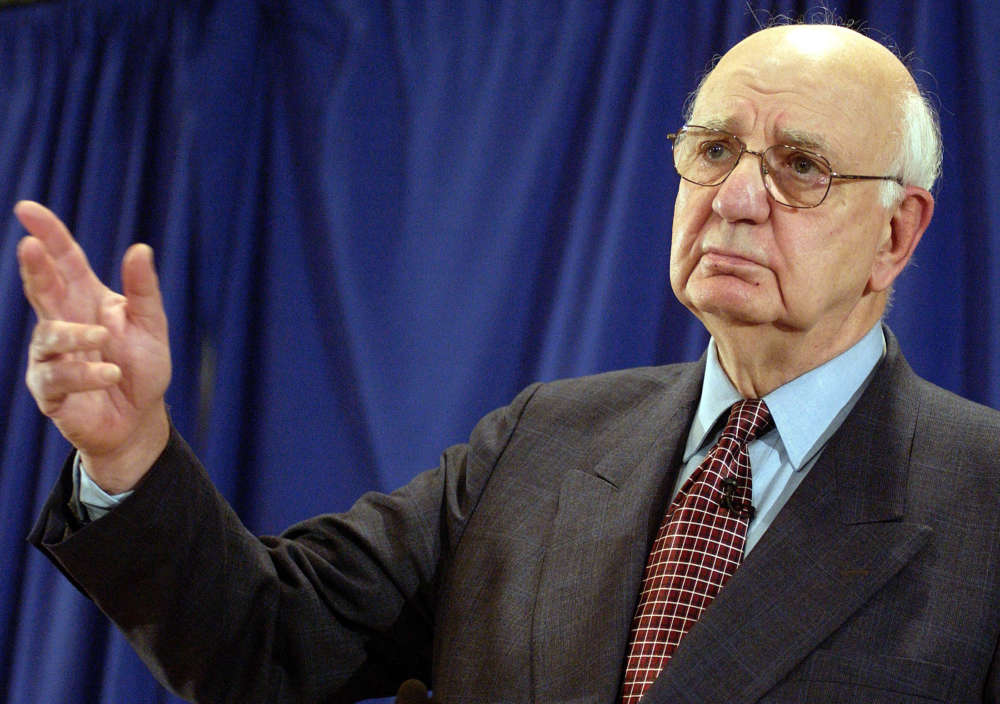 Paul Volcker, the towering former Federal Reserve chairman who tamed U.S. inflation in the 1980s and decades later inspired tough Wall Street reforms in the wake of the global financial crisis, died on Monday at the age of 92, according to the New York Times, which quoted his daughter.

Volcker, who media reports said had been suffering from prostate cancer, was the first to bring celebrity status to the job of U.S. central banker, serving as chairman of the Federal Reserve from 1979 to 1987. As with the man who succeeded him, Alan Greenspan, Volcker could soothe or excite financial markets with just a vague murmur.

In 2018 he published a memoir, “Keeping at It: The Quest for Sound Money and Good Government,” and expressed concern about the direction of the federal government and the loss of respect for it.

“The central issue is we’re developing into a plutocracy,” he told the New York Times in October 2018. “We’ve got an enormous number of enormously rich people that have convinced themselves that they’re rich because they’re smart and constructive. And they don’t like government and they don’t like to pay taxes.”

In 2009, Volcker began serving as a key financial adviser to President Barack Obama and faced a maelstrom of financial turmoil, government bailouts and fallout from the deepest recession since the 1930s Great Depression.

In working to help the U.S. economy recover from the 2008 crisis, he proposed what became known as the Volcker rule that restricted banks from making high-risk investments with depositors’ cash. Since Donald Trump, who favors fewer regulations, became president in 2017, the rule has been under review.

Volcker stood 6-foot-8 (2.03 metres), smoked cheap cigars, wore old suits and spoke with a rumbling baritone, creating a mystique that intimidated congressmen and even presidents. Part of his aura of power was due to the Fed’s unusual nature – the central bank’s governors, although appointed by the president and overseen by Congress, are effectively answerable to no one.

Volcker, who slammed the economy’s brakes like no other Fed chair, also absorbed his share of barbs from lawmakers in the 1980s. But he faced down both that criticism and, ultimately, inflation that had spiked higher than any point since the 1940s.

“Without Paul Volcker’s toughness and guts, we may never have broken the grip of rising inflation and declining productivity that plagued the United States during the 1970s,” former SEC Chairman Arthur Levitt wrote in the foreword of a Joseph Treaster’s 2004 biography “Paul Volcker: The Making of a Financial Legend.”

Many have credited that effort for setting the stage for steady economic growth and a long bull market that since the early 1990s brought prosperity to millions of Americans. Yet critics say he also pushed the United States into an unnecessarily severe recession in 1981-82.

Volcker was appointed Fed chairman by a Democratic president, Jimmy Carter, and then reappointed by a Republican, Ronald Reagan. He was only a few months into the job when on Oct. 6, 1979, he announced a 1-point rise in the discount interest rate to an all-time high of 12 percent.

Other borrowing costs followed and the prime rate climbed to a record 20.5 percent by May 1981. Unemployment rose to 11 percent and the country was steeped in economic malaise. Yet between 1980 and 1983, inflation fell from nearly 15 percent to less than 3 percent.

Volcker’s inflation-slaying action spurred massive protests, with farmers blockading the Fed’s headquarters with tractors, and builders famously mailing him a wooden 2×4 to show their lumber was no longer needed. One U.S. senator demanded that he take his “boot off the neck of the economy.”

Volcker, however, later conceded he had made a mistake by ordering such a major squeeze on credit, telling Reuters in 1987 that if he could, “I would have played it different.”

After leaving the Fed, Volcker led a series of blue-ribbon panels, including one that investigated the U.N. oil-for-food programme that had been designed to provide humanitarian relief to Saddam Hussein’s Iraq while it was under international sanctions.

He found that some 2,200 companies in 66 countries diverted $1.8 billion to Saddam’s government, and that Saddam earned another $8 billion selling oil outside the programme.

In 1999, he led a committee of Jewish groups and Swiss banks to resolve questions over unclaimed bank accounts of Holocaust victims, eventually brokering a $1.25 billion agreement.

In 2002, Volcker headed an independent oversight committee looking into the Arthur Anderson accounting firm following its role in the Enron scandal. Enron had filed for what was then the biggest bankruptcy in U.S. history under questions about its finances and accounting practices, and Anderson had signed off on its books.

Although the panel’s work was upstaged by criminal indictments, some of Volcker’s recommendations were incorporated into the Sarbanes-Oxley Act passed by Congress in 2002.

Years later under Obama, Volcker headed the Economic Recovery Advisory Board from 2009-2011 where he was a sharp critic of modern banking, musing that the only useful recent banking innovation was the automated teller machine.

He gained new notoriety after Obama asked Congress in 2010 to tuck the Volcker rule into the landmark Dodd-Frank financial reform law, which was meant to avoid a repetition of the 2007-2009 financial crisis.

In September 2012, he told Reuters the Volcker rule’s “surgical swipe” at speculative proprietary trading is a better approach to reining in huge financial institutions than the more extreme calls to break them up.

Beginning in his years at the Fed, when he railed against the huge U.S. trade and budget deficits and battled inflation at every opportunity, investors idolised the man. Since publishing his book in 2018, Volcker has even criticised the Fed’s overly precise devotion to a 2-percent inflation target.

“Paul Volcker is an immovable force when it comes to his beliefs and his principles,” friend and former U.S. Commerce Secretary Peter Peterson said in May 2013, when the Economic Club of New York presented Volcker a leadership award.

Born Sept. 5, 1927, in Cape May, New Jersey, Volcker was educated at Princeton, Harvard and the London School of Economics. He was an undersecretary at the Treasury Department during the Nixon administration and president of the Federal Reserve of New York before taking over the Fed chairmanship.

His wife of 44 years, Barbara, died in 1998 after many years of suffering from rheumatoid arthritis. They had two children.