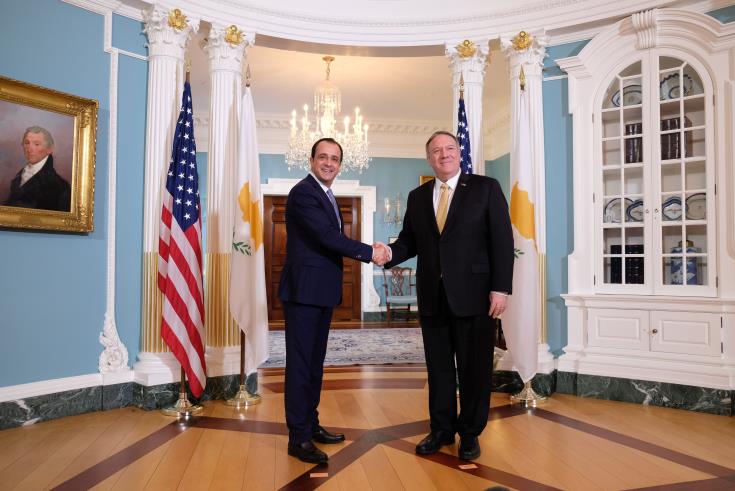 Secretary of State Mike Pompeo underlined the commitment of the United States in the Eastern Mediterranean and in deepening bilateral relations with the Republic of Cyprus in the field of security, while welcoming on Monday his Cypriot counterpart, Nicos Christodoulides, at the State Department, in Washington.

This is the second time the two men meet this year, after their encounter in Jerusalem last March. They had a warm and friendly meeting, in the presence of Philip Reeker, the Assistant Secretary of State for European and Eurasian Affairs. A State Department official said that the two Ministers marked the first anniversary since the signing of the statement of intent, aiming to enhance their security relations, particularly in fields of common interest for combating terrorism, enhance maritime security and border security and promote regional stability.

The same official said that Pompeo “confirmed longstanding US policy over the right of the Republic of Cyprus to develop natural resources in its exclusive economic zone and the continued support of the US in Cyprus-led efforts, under the facilitation of the UN, for the reunification of the island in a bizonal bicommunal federation, to the benefit of all Cypriots.”

A Cypriot source said that the discussion concerned the next steps in bilateral relations, in the framework of the statement of intent, which includes a discussion for concluding an agreement over information security and other programs bypassing the existing embargo, until this is lifted by the Congress.

Moreover, talks will start to include Cypriot tourists in the visa waiver programme and with a view to conclude an agreement to avoid double taxation.

Christodoulides informed Pompeo about the trilateral cooperation schemes Cyprus and Greece are promoting in the region, with the US official reiterating his support to the “3+1” format.

Pompeo also informed Christodoulides about his talks with the Turkish Foreign Minister Mevlüt Çavuşoğlu, last week in Washington. According to diplomatic sources, Pompeo conveyed the message that the United States are not contemplating a Cyprus settlement other than a bizonal bicommunal federation. He also addressed the issue of rising tensions caused by Turkey in Cyprus’ exclusive economic zone, lending his support to the Republic of Cyprus.

In an announcement, the Cyprus Foreign Ministry said the two men had agreed that Cyprus-US bilateral relations on a wide range of issues are on a path of steady growth. The two men also discussed efforts to resume settlement talks in Cyprus, aiming at a bizonal bicommunal federation.

“Acknowledging that bilateral relations on a wide range of issues are on a path of steady growth, they reconfirmed the political will of the governments of both countries towards this direction and discussed concrete ways to further enhance cooperation” the announcement said.

On the occasion of the one-year anniversary since the signing of the statement of intent between the Republic of Cyprus and the United States of America, aiming to enhance bilateral cooperation in the broader field of security, Christodoulides and Pompeo welcomed the progress achieved until today in implementing joint actions in the framework of the statement, in fields such as maritime security, combating terrorism, tackling drug trafficking and dual-use items, and cooperating in humanitarian operations, it added.

They expressed at the same time satisfaction over the fact that these actions contribute in enhancing stability and security in the broader region.

The two Ministers also talked about the latest developments regarding the Cyprus problem, focusing on efforts that are underway, aiming to resume substantive negotiations that will lead in a Cyprus settlement on the basis of a bizonal bicommunal federation, with Christodoulides expressing hope that Ankara will display the necessary constructive attitude.

As part of their discussion about the latest developments in the Eastern Mediterranean region, Christodoulides and Pompeo exchanged views about the escalation of Turkish illegal activities within the maritime zones of the Republic of Cyprus.

Finally, Christodoulides informed his interlocutor about progress in promoting trilateral cooperation schemes together with Greece and countries from the region, aiming to jointly address challenges and enhance regional cooperation.

By In Cyprus
Previous articleTwo dead after bridge collapses into river in France
Next articleU.S. backs Israel on settlements, angering Palestinians and clouding peace process