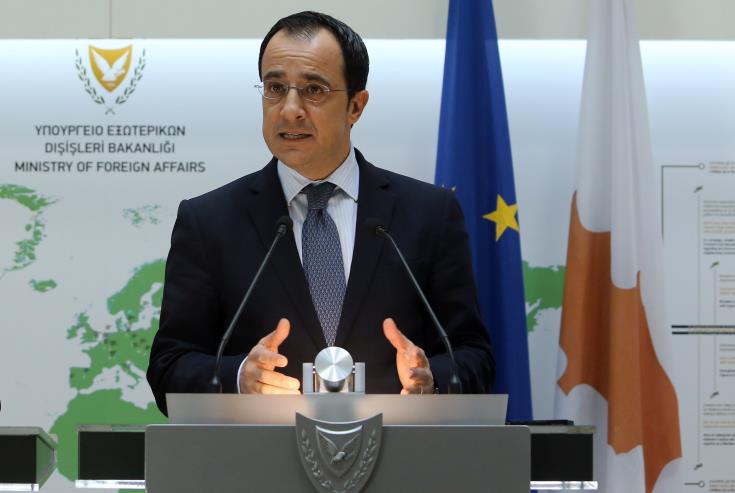 The decision of the United States to lift the arms embargo on Cyprus is of “political and diplomatic significance” demonstrating the will of the US to upgrade bilateral relations with Cyprus on the basis of a positive agenda and is not turning against any third country, Foreign Minister Nikos Christodoulides said on Saturday.

The embargo did not reflect the level of bilateral relations, according to the Minister, who said however that the Republic of Cyprus does not intend to buy US weaponry.

Speaking at the Foreign Ministry, Christodoulides said that the US decision sends strong messages as to how the US approaches the Eastern Mediterranean and the trilateral cooperation between the Republic of Cyprus, Greece and Israel, as well as its bilateral relations with the Republic of Cyprus.

He said moreover that in the coming period more developments should be expected, as the two sides intensify their discussions to waive the visa requirement for Cypriot passport holders visiting the US. Nicosia and Washington also discuss upgrading their agreement to avoid double taxation, Christodoulides added.

The Foreign Minister referred moreover to efforts – ongoing since 2013 – to differentiate the approach of the US towards the Republic of Cyprus, solely on the basis of the Cyprus problem or US-Turkey relations.

These two factors comprised the core of the US approach towards Cyprus, the Minister said, adding that this seems to change now. We deem this important for our bilateral relations, our trilateral cooperation with Greece and Israel and for the Eastern Mediterranean in general, he added.

Asked about certain objections raised by President Trump in relation to various provisions of the “Eastern Mediterranean Security and Energy Partnership Act”, Christodoulides said that they have to do “exclusively with internal balances in the US over who decides and who has a say in foreign policy decisions.”

Asked if Cyprus is buying weaponry from the US, Christodoulides said that the political and diplomatic aspects of the US decision is what matters most for Nicosia. He added that there is no such intention or decision on the part of the Republic of Cyprus. At the present stage, he said, there is no political decision or suggestion by the competent Ministry to do so, Christodoulides said.

Asked about provisions in the bill, limiting the transfer of F-35 fighter jets to Turkey, the Minister remarked that US-Turkey relations may not be at their best point, but this could change in the future. He added that Nicosia’s foreign policy is not a zero-sum game, adding that this approach of the past does not reflect the current political approach.

The United States, he went on, ascribe particular importance to the Eastern Mediterranean on a number of issues, including security, terrorism and the energy prospects for Europe.

Asked about Nicosia’s vision for the region, Christodoulides referred to the potential for cooperation and said that if Turkey decides so, it could join the rest of the region’s countries in order to tackle existing challenges.

The Minister of Foreign Affairs was also asked about certain provisions in the US bill, making particular reference to Russia and whether Nicosia could find itself in the midst of US-Russian antagonism. Christodoulides repeated that cooperation is promoted on the basis of a positive approach, without targeting any third country.

He also commented on provisions calling for Cyprus’ cooperation on financial regulatory oversight matters and said that the Republic of Cyprus is an EU member state and party to several international organisations and is being constantly subjected to controls, with very positive results.

As to the role of the Republic of Cyprus in the region, the Foreign Minister said that Nicosia continues to facilitate various countries for humanitarian operations in the region and will continue to play this role, taking advantage of its excellent relations with all neighboring countries.

He said moreover that the US bill reflects the view of the US government on the region and noted that the Republic of Cyprus takes its decisions on the basis of how to serve its interests best.

Replying to another question the Minister said that Nicosia maintains diplomatic contacts with the Russian Federation and pointed to a recent visit of the Ministry’s Permanent Secretary to Moscow. He said that within 2020 some concrete developments in bilateral relations with Russia should be expected.