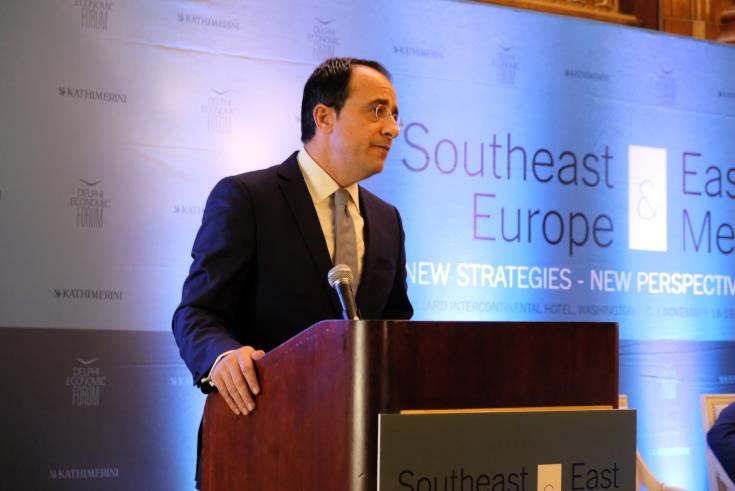 The event, to mark 60 years since Cyprus’s independence, titled ‘[email protected]: Opportunities, Challenges, Prospects for Reunification’, was jointly organised by the National Federation of Cypriots in the UK and the All-Party Parliamentary Group for Cyprus.

Christodoulides branded Turkey a “spoiler pursuing a neo-Ottoman vision in the region”. As he said, “in unprecedented times Turkey is escalating its provocative actions and systematically promotes a multifaceted strategy to implement its hegemonic, revisionist vision for the region, in clear violation of international law”.

He added: “The Turkish leadership seems to be utilising the international community distraction caused by the pandemic in order to intensify and further promote its plans.”

Christodoulides updated the APPG members on the latest illegal Turkish drilling within the Republic of Cyprus’s maritime Exclusive Economic Zone and continental shelf, the sixth in less than a year, as he underlined.

The Cypriot Foreign Minister noted that such actions form part of “the overall revisionist policy” of Turkey, exemplified by its “expansionist interventions in Libya, in northern Iraq and its illegal actions in Greece”.

He noted that Nicosia expects from the UK Government “to convey firm and clear messages (to Turkey), both in public statements but also in contacts with officials”.

Referring to the reaction by the international community, he said that it is time “to respond in a coherent and firm manner to Mr Erdogan’s increasingly authoritarian, erratic behaviour,” pointing to the enhanced restrictive measures agreed at EU level.

The Minister also stressed that “in the current poisonous climate of provocations and aggression it cannot be expected that result-oriented negotiations for the Cyprus problem can resume”. He assured the MPs that Cyprus remains “strongly committed” to efforts to reunify the island and its people and that it remains ready to resume negotiations from where they have stopped.

Christodoulides also presented the three main pillars of Cyprus’s foreign policy, namely the enhancement of relations with countries of the region, assuming a more active involvement within the EU, and strengthening ties with all five permanent members of the UN Securiy Council and other key partners such as Japan and India.

Referring to the bilateral relationship with the UK, he commented that it is entering a new era in the post-Brexit landscape, in which he sees “a lot of potential for expanded cooperation”.

The virtual event was attended by the UK Foreign Minister for the European Neighbourhood Wendy Morton, who commented that the bilateral cooperation during the pandemic has proven how strong these ties are, as Britain and Cyprus have worked closely together to help Cypriots in the UK and Brits in Cyprus to return home.

She also highlighted, as Christodoulides had done as well, the arrangement on non-military development in the Sovereign Bases.

On the Cyprus issue Morton said: “Recent developments underline the importance of a comprehensive, just and lasting settlement of the Cyprus issue, based on the internationally accepted model of a bi-zonal, bi-communal federation.

“We continue to believe that the best long-term way to resolve tensions in the region – including on the Turkish exploration of hydrocarbons in the waters around Cyprus – is to achieve a settlement on the Cyprus issue.

“We hope that all parties will redouble their efforts towards a settlement.”

Morton was followed by the Conservative Chairman of the APPG for Cyprus Sir Roger Gale, who commented that 46 years of occupation is “far too long” and that Ankara’s illegal acts in Cypriot waters “cannot be allowed to continue”.

Fabian Hamilton, Shadow Minister for Peace and Disarmament for the Labour Party, and the party’s representative on Cyprus, expressed support for the reunification of the island as a bizonal, bicommunal federation, as a “normal and viable” state, which does not require the “outdated” guarantees.

He also made special references to the issues of refugee properties and the humanitarian issue of the missing Cypriots. He castigated Turkey’s drilling operations in Cypriot waters as a “wholly unacceptable act of aggression”.

The Liberal Democrats’ spokesperson for foreign affairs Alister Carmichael lamented the fact that the Cyprus issue doesn’t get the attention it needs and said that all parties are broadly aligned in support for a bizonal bicommunal federation.

Bambos Charalambous of the Labour Party condemned Turkey’s lack of understanding of sensitivities of others and lack of respect, exemplified not only in Cyprus’s case but also in the decision to turn Hagia Sophia into a mosque.

Christine Jardine of the Liberal Democrats commented that it seemed “inconceivable” that the Cyprus problem has yet to be resolved.

The event was closed by Theresa Villiers, Conservative MP for north London, who said it has been a privilege to support Cyprus for so many years and that she would always campaign for justice in Cyprus. She hailed the “huge progress” the country has made over 60 years, describing it as a prosperous country which is a “pillar of stability in an unstable region”.

She also expressed her shock at hearing about the plans to inhabit Famagusta and about Hagia Sophia.

In his introduction the President of the Federation Christos Karaolis described a reunified Cyprus as “both attainable and viable”.

“What we want is fair, simple, and rooted in international law. A free, united Cyprus through a solution based on relevant UN Security Council resolutions and the High Level Agreements,” said Mr Karaolis.

He also commented that Cyprus has defied the odds “to shine as a democratic modern and stable nation… a beacon of hope, stability and prosperity in the region… as well as a predictable and reliable ally to the UK”.

The virtual event was also attended by the Cypriot High Commissioner in the UK Andreas Kakouris, as well as a number of other MPs and members of the House of Lords.