For Russia, five Goals and one big sigh of relief 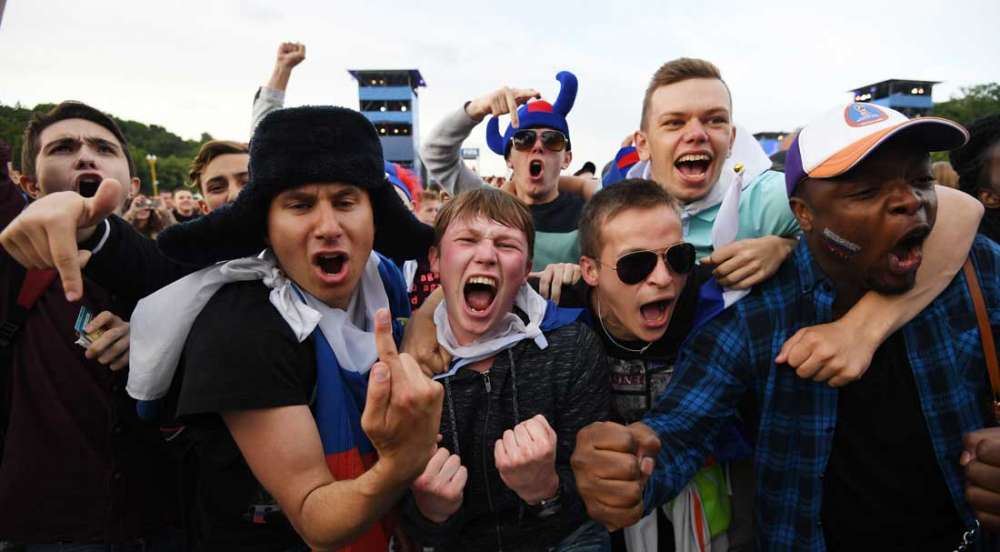 Alone among the thousands, Alexander Golovin stood still. On the field, his Russian teammates were careering toward him. On the sideline, his coaches were bouncing and ricocheting around.

In the stands, his fans, long-standing and newly acquired, had their arms aloft, punching the air, fluttering flags and flickering golden stars. In the executive boxes, even Russia’s president, Vladimir Putin, ordinarily so impassive, twitched the corners of his mouth in what could, just about, be recognized as a smile.

This World Cup has been seen, almost from the start, as Putin’s. He helped swing the vote to bring it here. He twisted the arms of Russia’s oligarchs to help pay for it. He is using it to project Russia’s power to its own citizens, and to the rest of the world.

But in that moment, as Golovin stood on the field at the Luzhniki Stadium, his arms stretched wide, inviting everyone to glory in the brilliance that had inspired Russia to a 5-0 win against Saudi Arabia, all that changed. For as long as the host country remains in the tournament — whether that is just 10 more days or longer — the most significant Russian in this World Cup is not the country’s president, but the baby-faced playmaker.

Amid all the excitement of being the host, Russia had dreaded this game. On paper, it seemed so easy: Saudi Arabia was the lowest-ranked team that had qualified for the competition. Not one of its players works consistently in Europe, or Latin America, or anywhere other than his homeland. To most, it looked like a gimme.

Not to Russia, though. To Russia, the match looked to be a humiliation waiting to happen. The Moscow Times had decreed that the host was “doomed to fail” in its own tournament. Artem Dzyuba, Russia’s towering striker, had felt moved to ask the local news media to put an end to the relentless negativity.

The fear was not just that Russia would be eliminated in the group phase, but that it might lose all three games. In a prematch news conference Thursday, every single question put to the coach, Stanislav Cherchesov, started with the same two words: Good luck. It was not immediately obvious where the emphasis lay.

Everything else was in order: The stadiums were ready, and the opening ceremony, led by Robbie Williams, the 1990s pop star, and Aida Garifullina, the Russian soprano, was as good as a nonsensical 15 minutes of interpretive dance can be. But the team was the point where it might all be exposed as a thin facade.

In Golovin, though, Russia has precisely what it feared it lacked: a player of genuine substance. Saudi Arabia might have offered scant resistance, but for a 22-year-old to produce a performance so devastating under pressure so asphyxiating warrants the highest of

praise. Russia scored five goals: Golovin created the first and third, was central to the second, then scored the fifth. Only the fourth, a quite beautiful, arcing strike from Denis Cheryshev, did not bear his imprimatur.

Neither that nor Golovin’s clever free kick a few minutes later made much of an impact on the outcome of this game. Russia was already well clear by then, and Saudi Arabia well beaten. The two goals may have some significance in a week and a half, though, should the Russians need to rely on goal difference to advance from the group.

But more immediately, they had a seismic effect on the mood. The first three goals had all been greeted with something closer to relief than joy: Perhaps this was not going to go so badly wrong after all. Cheryshev’s, the team’s fourth, left mouths agape.

The fifth, so soon after, turned the mood into something else again, into something closer to delirium. Russia will not win this tournament. It will almost certainly not make the quarterfinals. But it will feel as if it might, just now, and for a day or two at least. A mere victory does not have that effect, but a rout can.

It will not matter in the slightest that this was not a game of the highest caliber, that it was pockmarked with misplaced passes and obvious flaws, that Saudi Arabia was so weak and Russia, at times, relatively pedestrian, that there are far better teams awaiting their turn to showcase their talents.

The quality of the soccer is secondary at a World Cup, especially early on; only later does it assume its role as a gauge of the global health of the game.

And the crowd at a World Cup game is less orthodox than it is for club matches, full of people along for the ride, swept up by the fervor of a big event. For proof, witness the wave — the hallmark of an audience not absorbed in a game — that swept round the Luzhniki after 4 1/2 minutes of this match. It felt like some sort of record, and not one of which a country should feel especially proud.

Still, what counts are the individual performances, the memorable moments, the feelings they produce.

Thanks to Golovin — and Cheryshev, scorer of two goals, including that one that may yet prove to be a contender for the tournament’s best — the feeling, unfamiliar for the host, is one of radiant optimism, a sense that it is not the host of the party only because it would not be invited otherwise.

Putin, of course, will be as relieved at that as anyone. He does not like to invest in failure. He called down to Cherchesov immediately after the game, offering his congratulations, and asking the coach to pass them on to his players. “He asked us to keep playing like this,” Cherchesov said.

Whether Russia can manage that against Egypt and then Uruguay, opposition of considerably greater pedigree than Saudi Arabia, remains to be seen. At least now, though, the host nation has hope, in the form of that cherubic boy in the No. 17 shirt, standing still in the middle of the tumult.