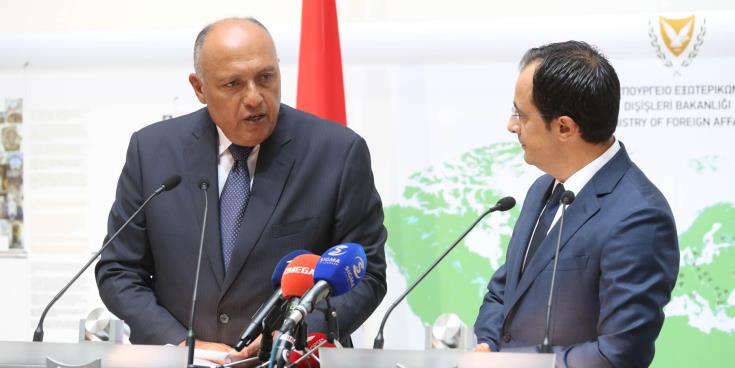 Means to strengthen their political partnership and bolster ongoing cooperation across various economic fields, especially in the energy sector, were discussed during a meeting held in Nicosia between the Minister of Foreign Affairs of Cyprus, Nicos Christodoulides and his Egyptian counterpart Sameh Shoukry, who is paying Cyprus an official visit.

“I hope my visit marks another important step in our common efforts to further consolidate the very special and close ties between Egypt and Cyprus. We had a very fruitful meeting. We have discussed means to strengthen our political partnership and bolster ongoing cooperation across various economic fields, especially in the energy sector,” the Egyptian Minister said.

He added that the discovery and future exploitation of significant hydrocarbon reserves in the Eastern Mediterranean have brought new impetus to our strong partnership and I hope the East Mediterranean Gas Forum that held its second ministerial meeting last week would open new horizon of cooperation and policy coordination with Cyprus and other countries in the region”.

On his part, Christodoulides said that the Egyptian Minister’s visit is a shining example of the importance Cyprus and Egypt attach to “our fast evolving partnership and demonstrates our commitment to enhance our vibrant relations and our cooperation at a bilateral, trilateral and multilateral level. Our discussions reflect also our common approach on a number of regional and international issues”.

Egypt, he said, is actively engaged during discussions in international fora, including the UN and the Organisation of Islamic Cooperation noting  “we are grateful for its support and I want to publicly record our appreciation”.

“Egypt’s firm stance, solidarity and clear position in support of Cyprus’ sovereignty and sovereign rights is also invaluable, especially taking into consideration recent developments in our Exclusive Economic Zone and particularly the illegal activities and aggressive behaviour of Turkey. Here too, I wish to thank the Minister for Egypt’s clear statement of support following Turkey’s illegal activities”, Christodoulides said.

The Egyptian Minister said they discussed the trilateral cooperation between Egypt, Cyprus and Greece, which serves as an important catalyst for stability and prosperity in the region.

Egypt, he added, looks forward to convening the seventh summit of the trilateral mechanism in Cairo later this year, in order to take stock of the achievements from the previous summits and discuss ways to reinforce the robust nature of our  trilateral partnership.

“My meeting with Minister Christodoulides gained specific importance given the turbulent situation in the region. We have held extensive talks on the ongoing developments in the Middle East and East Mediterranean. We exchanged views on ways to enhance coordination in pursuit of peaceful solutions to the current crises”, he added.

The Egyptian Minister said he reiterated Egypt`s position in support of the Cypriot efforts aimed at reaching a comprehensive, just and viable solution to the Cyprus problem, based on the relevant UNSC resolutions and international law.

He also stressed that Cyprus is a main strategic partner to Egypt, noting that  mutual interests, common values and historical links bind the two countries for decades.

“Our partnership has gained great momentum over the last five years and is set to grow in the years to come, driven by a strong political will in both Cairo and Nicosia”, he concluded.

In his statements, Christodoulides said that “our long history of close friendship, understanding, mutual respect and cooperation has entered a new, even more dynamic phase and our ties in a plethora of areas are deepening and expanding rapidly. I am also particularly pleased to see our business communities and our societies engaging more actively, adding to the vibrancy of our relations”.

Today, he said,  they reviewed bilateral ties and discussed ways to further advance their cooperation which has already produced considerable results in a number of areas.

“We gave added focus to our energy cooperation, a game-changer in our wider effort to promote security, stability and prosperity in the Eastern Mediterranean. One such example is the Egyptian initiative for the establishment of the East Med Gas Forum initiative. Cyprus has supported this initiative from the very beginning and we are very glad that the Forum already enjoys the support of the countries in the region and beyond, and the EU, notably the European Commission” Christodoulides said.

He added that Cyprus shares with Egypt a common vision for the Eastern Mediterranean, a future of peace, security, stability and prosperity for our countries and our peoples.

“This was our goal when we decided, together with Greece, to establish our trilateral cooperation. We are actively engaged in establishing synergies in our immediate and wider neighbourhood, working on the basis of a positive agenda that does not exclude and is not aimed against any third country, because we are convinced that this model of cooperation can bring about change and prepare the ground of a peaceful and prosperous future”.

He went on to say that “we both agree that we have an obligation and responsibility to explore with even more enthusiasm the potential of this positive agenda and provide our trilateral mechanism with the necessary tools to further develop the unquestioned potential and opportunities. This is, in part, a core reason why we decided to establish the Permanent Secretariat which Cyprus is pleased to host”.

Christodoulides said that Egypt is an agent of stability and a core partner in our region and, as such, it plays a key role in resolving conflicts, in combating terrorism and addressing the challenges of our immediate region and beyond.

“Today we compared notes at length on some of the most serious and pressing challenges in our region, including the Middle East Peace Process, Syria, Libya and Migration, and I was particularly interested to hear from Minister Shoukry his perspective on these issues”, he said.

The Cypriot FM added that they also discussed EU-Egypt relations and that  “I reiterated our position that EU-Egypt cooperation is crucial in our efforts to successfully address the common challenges in our region. Cyprus will continue to actively advocate for the strengthening of these relations through a holistic approach focusing on the entire spectrum of our cooperation. In this, Cyprus fully recognizes and appreciates Egypt’s challenges, both internally and externally”.