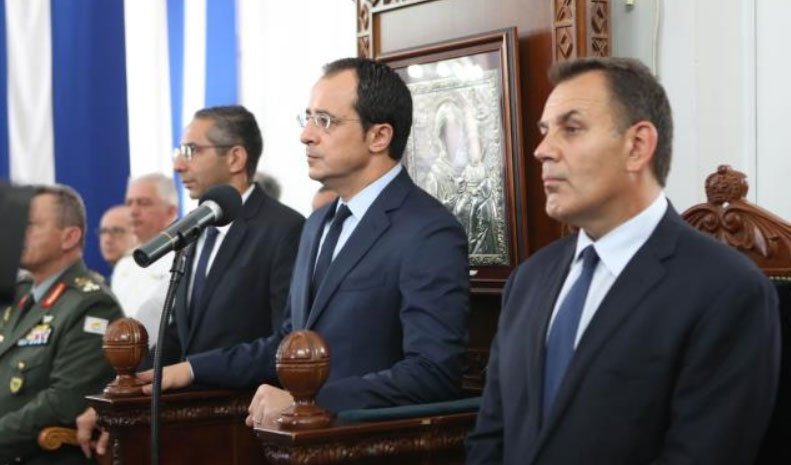 Cyprus Minister of Foreign Affairs Nikos Christodoulides reiterated the Greek Cypriot side’s will for a new round of UN-brokered talks from where they left off at the swiss resort of Crans Montana in July of 2017.

Christodoulides’ remarks came as Cyprus commemorate the fallen during the 1974 Turkish invasion that resulted in the occupation of 37 per cent of the island’s territory.

“Our sincere will is for the termination of the current unacceptable destabilizing conditions and threats and the return to the negotiating table from where they left off in Crans Montana,” Christodoulides said addressing the formal memorial service held at Faneromeni Church in the old part of Nicosia

“For a comprehensive solution to the Cyprus problem that safeguards conditions of peace and security for all Cypriots and a functional, independent state,” Christodoulides said, adding “in this state, a member of EU, there is no place for guarantees and foreign armies, there is solely a place for the implementation of human rights, international law and the principles and values of the EU for all its citizens.”

The Cypriot FM added that “despite Ankara’s continued provocations, the Greek Cypriot side with devotion and determination and utilizing every means at its disposal exerts sincere and intensive efforts for the resolution of the Cyprus problem aiming at a viable and functional solution.”

“A bi-zonal and bi-communal solution with political equality, based on the UN relative resolutions, the principles and values of the EU and the EU acquis, a solution that would really reunite and restore Cyprus as a modern, functional and efficient state with a single sovereignty and international personality,” he said.

By In Cyprus
Previous article17 year old in critical condition after Kornos road accident
Next articleWatches and other items worth 17,000 euro stolen from house in Paralimni