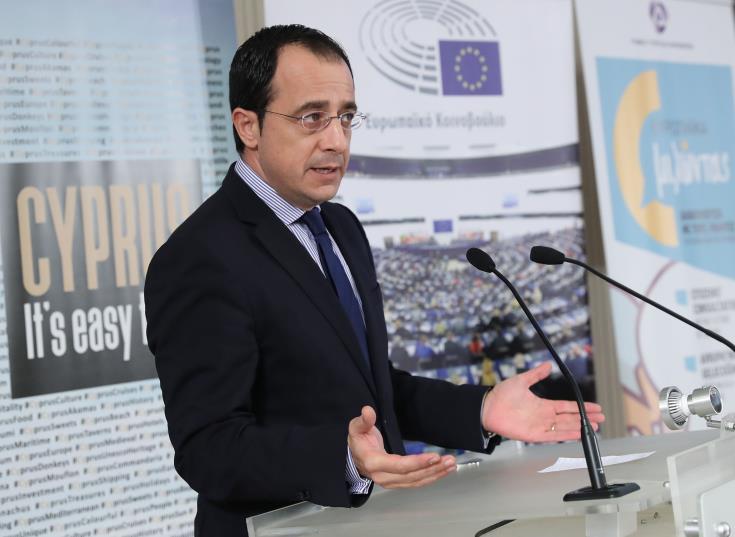 Foreign Minister Nicos Christodoulides has outlined to MPs the pillars on which Cyprus’ foreign policy is based, that would ultimately serve the goal of reaching a solution το the Cyprus problem, during the presentation of the ministry’s budget for 2019 before the parliamentary committee on financial and budgetary affairs.

In statements to the media, Christodoulides said that he had the opportunity to brief MPs “on the three key pillars of our foreign policy which among other things aim to serve our top priority, which is none other than the solution of the Cyprus problem.”

We believe that through a collective effort in matters of foreign policy we can achieve better results, he noted, reiterating that the country’s top goal would be to reach a solution to the Cyprus problem on the basis of the relevant UN resolutions and the EU principles and values.

Cyprus has been divided since the 1974 Turkish invasion. UN-backed negotiations with the aim to reunite the island under a federal roof ended inconclusively in the summer of 2017 at the Swiss resort of Crans-Montana.

Referring to the UN peacekeeping force in Cyprus (UNFICYP) the Foreign Minister expressed his belief that there will be no problem with its mandate renewal in January, adding that the goal will be to enhance the force’s effectiveness in Cyprus.

The United Nations Peace Keeping Force in Cyprus comprising military and civilian personnel from various contributing countries, arrived in Cyprus in March 1964 after intercommunal fighting broke out. The mandate of the force is renewed every six months by the Security Council.

Christodoulides also referred to a proposal adopted by the Cabinet recently on the establishment of a permanent secretariat in Cyprus on the trilateral cooperation with Greece and other countries of the region, in the context of the first foreign policy pillar which has to do with enhancing relations with countries in the Middle East and the Gulf.

The secretariat will be located close to the Ministry of Foreign Affairs and will be staffed by diplomats from Cyprus, Greece, Israel and Egypt, he said, adding that the government intends to also invite Jordan to take part.

A trilateral meeting between Jordan, Cyprus and Greece is due to take place in Cyprus on December 19, he added.

The Foreign Minister also informed MPs that Palestinians will also be invited to take part in the project, adding that a trilateral meeting at FM level is set to take place, on December 17, in Athens.

A long-term goal which we have started discussing with countries in the region is the establishment in Cyprus, in 4 to 6 years, of a regional security and cooperation organisation for the Eastern Mediterranean. A move which is also viewed under a positive light by the EU, he added.

Christodoulides also announced that a proposal is under study to establish a European affairs secretariat which would coordinate all different departments on European matters, aiming to enhance Cyprus’ active participation in developments in Brussels.

Replying to a question during his statements on the possibility of seeking to establish a new European authority in Cyprus, he noted that as part of the country’s more active participation in the EU, which constitutes the second pillar of its foreign policy, “we consider that a European organisation should operate in Cyprus.”

He explained that the government has been in touch with other member states and the European Commission seeking to have the new organisation, which will deal with labour related matters, established on the island.

Asked about provocative statements on the part of Turkish officials on the exercise by Cyprus of its sovereign rights within its Exclusive Economic Zone, he made it clear that “under no circumstances will we take part in a public discourse which aims to question on a communications level, the Republic of Cyprus’ sovereign rights.”

Christodoulides assured at the same time that “we are taking the necessary steps for some time now in order to guarantee the unhindered implementation of our energy plans.”

At the same time, he reiterated that Cyprus has publicly called on Turkey “to start negotiations to delineate our maritime boundaries on the basis of international law, on the basis of the UN Convention on the Law of the Sea of 1982.”

Turkey disputes Cyprus’ right over its EEZ and has blocked twice in the beginning of 2018 a drill ship commissioned by Italian ENI to carry out natural gas exploration in Cyprus’ off shore block 3.  Exploratory drilling by US energy giant ExxonMobil has recently begun in plot 10 of Cyprus’ EEZ.

By In Cyprus
Previous articleTax to GDP ratio in Cyprus stood at 34% in 2017, according to Eurostat
Next articleTechnical Committee restores two more monuments in Famagusta