FM highlights importance of trilateral cooperation for stability in the region 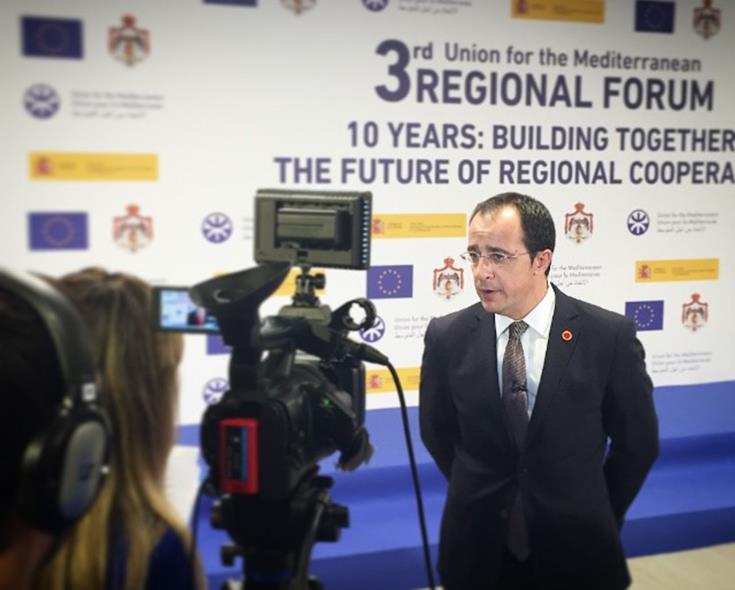 Foreign Minister Nicos Christodoulides has highlighted the importance of the trilateral mechanism of cooperation between Cyprus, Greece and the countries of the region, saying that this cooperation promotes the stability in the Eastern Mediterranean.

The FM also referred to the need to further develop the Union’s impetus and potential so that it could serve as a means and tool for tackling the various challenges the countries of the region are faced with.

On the sidelines of the Forum , Christodoulides had a meeting with Spanish Minister of Foreign Affairs, European Union and Cooperation Josep Borrell, during which they reiterated the very good level of bilateral ties. They also discussed the Cyprus problem and regional and European issues.

A total of 25 Ministers from the EU and the Mediterranean attended the Forum as well as Federica Mogherini, High Representative of the European Union for Foreign Affairs and Security Policy and Johannes Hahn, the Commissioner for European Neighbourhood Policy and Enlargement Negotiations.

During the Forum the participants assessed the role and activities of the Union, in the ten years of its operation and they exchanged opinions for its future course.

By In Cyprus
Previous articleCypriot households and businesses remain highly indebted
Next articleUpdate: Fire at warehouse in Livadhia contained (video)