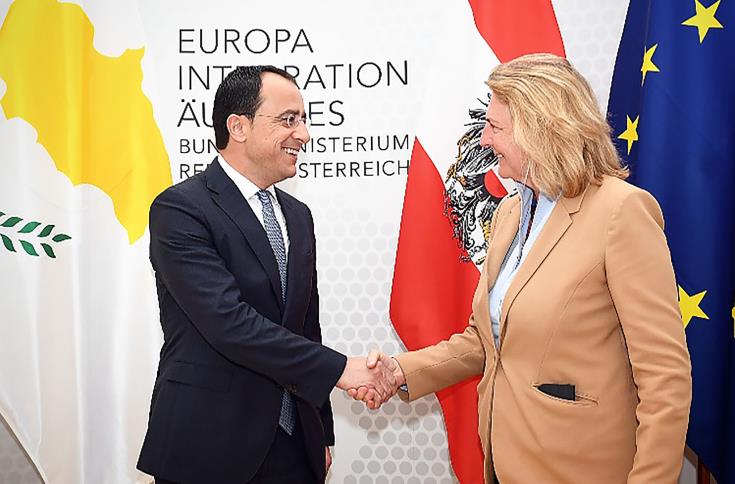 The priorities of the Austrian Presidency of the Council of the EU, the Cyprus problem, Brexit and the situation in the Eastern Mediterranean were on the agenda of the talks FM Nicos Christodoulides held in Vienna.

The FM held a working visit to Vienna and met with his counterpart Karin Kneissl ahead of the Austrian EU Presidency starting on July 1st.

According to a press release issued by the Foreign Ministry, the two Ministers discussed the positions of  Cyprus on the Austria EU Presidency’s priorities and how Nicosia could assist in implementing the issues of direct interest for the Austrian Presidency and the EU in general.

The Foreign Minister spoke about the importance of the wider eastern Mediterranean region and the need to strengthen the EU`s dialogue with the countries of the region. He also pointed out the role that Cyprus can play in this direction, taking into account the excellent relations the country has with all the neighbouring states, the Trilateral Agreements it has developed as well as the fact that Cyprus is the only EU Member State in the region.

The two Ministers also exchanged views on the issues and challenges the EU is faced with, including the Western Balkans, the Multiannual Financial Framework (MFF) 2020-2027, the relations between US and the EU, EU`s relations with third countries, the debate on the Future of Europe, Brexit and Immigration and Asylum Policy issues.

In addition, the two Ministers exchanged views on the issues of immediate Cypriot interest that will concern the upcoming Austrian Presidency, as well as the EU – Turkey relations and the Conclusions on the Enlargement process to be adopted later this month.

Christodoulides also briefed his counterpart on the Cyprus issues and the efforts to resume the UN backed talks. Eastern Mediterranean energy perspective in connection with the EU`s energy policy, as well as the bilateral relations, were also on the agenda of the meeting. The two ministers also talked about the upcoming visit of President Nicos Anastasiades to Vienna later in 2018.

Cyprus has been divided since 1974 when Turkey invaded and occupied its northern third. The latest round of peace talks under the UN auspices took place last summer but failed to yield any results.

By Bouli Hadjioannou
Previous articleFor Russia, five Goals and one big sigh of relief
Next articleEmployment in the public sector up 1.84% in Q1 2018