FM: ‘Cyprus government satisfied with the results of deliberations with Pompeo’ 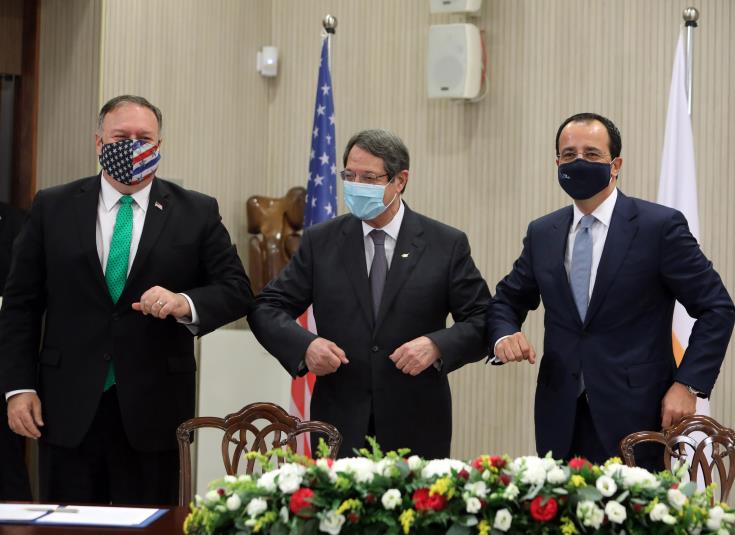 The Cyprus government expressed satisfaction over the results of the talks it had on Saturday with the US Secretary of State, Mike Pompeo, who paid a short visit to the island.

In statements to the Cyprus News Agency (CNA), Foreign Minister, Nikos Christodoulides, expressed satisfaction over the results of Pompeo’s visit and noted that during his talks with Cyprus President Nicos Anastasiades, which Christodoulides attended, the US official expressed the US commitment and interest in the broader Eastern Mediterranean region and the need for conditions of security and stability to prevail.

As regards the discussion that took place about the illegal actions of Turkey in the Eastern Mediterranean and its activities in the broader region, the Foreign Minister noted that emphasis was given on the need for such issues to be resolved through dialogue or by recourse to the International Court of Justice, taking into consideration the 1982 UN Law of the Sea Convention.

With regard to the Cyprus problem, Christodoulides said that the need for the resumption of the settlement talks from where they were suspended in Crans-Montana, immediately after the voting process in the Turkish occupied areas of the Republic of Cyprus that will take place in October, and in a conducive environment was stressed, with a view to reach a settlement providing for a bi-zonal, bi-communal federation on the basis of the relevant UN resolutions.

The Foreign Minister described as important the discussion that took place with regard to the Turkish intentions about the fenced off city of Famagusta and the role which the US can play on this issue as a UN Security Council permanent member. He noted that President Anastasiades noted to Pompeo the negative impact which the implementation of the Turkish announcements for the illegal settlement of Famagusta will have as regards the prospects for a Cyprus solution  and elaborated on his proposal about Famagusta, the approval of which would help towards the aim for an overall solution of the Cyprus problem.

Christodoulides also said that in the framework of the discussion about the developments in the broader Middle East and Gulf region the two sides exchanged views on the importance of the trilateral cooperation schemes which Cyprus has developed with countries in the region as Israel, Egypt and the UAE, on the basis of a positive approach, with special references to the importance of the establishment of the Energy Forum in Cairo, which, inter alia, supports cooperation in the field of Energy.

He noted that bilateral relations of the US and Cyprus were also discussed, noting that they have been significantly upgraded in various sectors and always on the basis of a positive approach. He said that this is shown by Cyprus’ participation in the US military training program IMET, the partial lifting of the US arms embargo on Cyprus and the signing of an MoU by himself and Pompeo after the talks, for the establishment of a training facility, in Cyprus, which will be named “Cyprus Center for Land, Open Seas and Port Security” (CYCLOPS).

The Foreign Minister said that the signing of the MoU is a significant development and for Nicosia’s broader goal for regional cooperation, taking into consideration that the Republic of Cyprus has excellent relations with all neighbouring countries and can function as a regional centre for cooperation on the basis of a positive approach.

Moreover he noted that the two sides discussed about the economic cooperation between the two countries and assessed the negotiations which are underway to lift visa requirements for Cypriot passport holders who wish to travel to the US.

Christodoulides was invited by CNA to comment on Pompeo’s statement that he raised during their talks “the US concern over Russia’s money laundering activities and its regular port calls” in Cyprus.

As regards the port calls of Russian ships he noted that the Republic of Cyprus provides humanitarian facilities to states and international organisations which request this kind of help, as it did in 2006 with Lebanon, later on with the UN and OPCW mission for the removal of chemicals from Syria and recently after the vast explosion in Beirut.

Repeated rounds of UN-led peace talks have so far failed to yield results. The latest round of negotiations, in the summer of 2017 at the Swiss resort of Crans-Montana, ended inconclusively.